At the start of 2012 BranchOut had just 1 million monthly active users. Then the professional networking app hired a dedicated growth team, launched a mobile web app, and hit the network effect tipping point. According to AppData, by February it had 2.7 million MAU. Now the Facebook-based BranchOut is blowing up, riding the employment needs of blue-collar workers past the 10 million registration mark to reach 5.5 million MAU, half from overseas.

Take heed entrepreneurs, this is how you concoct a startup growth formula…

Find a real problem. LinkedIn works if you’re a white-collar grad with a great resume and tons of professional contacts to tap. But what if you’ve only got basic schooling and experience, and your only contacts are your friends? BranchOut lets you convert your existing social graph into your professional network, something LinkedIn’s lack of a meaningful Facebook integration prevents. It can help you find a top tech career, or a blue-collar temp job.

With each friend you add on BranchOut, you get access to the names and employers of their friends, even if they’re not on BranchOut. That means there are actually 400 million profiles on BranchOut. Your second-degree connections can be searched so when you’re applying for a job, you can find out if someone you know happens to know someone who works there. Then you can request an intro and referral. With the world’s economy still shaky, helping people without other resources to find jobs is a real problem worth serious societal benefit. 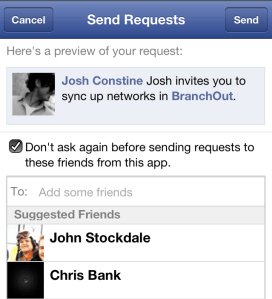 Hire a dedicated growth team. BranchOut now has a full-time team working on analytics, A/B testing, new designs, registration flow optimization and viral techniques. They made it extremely simple for a user to invite their most relevant friends to join BranchOut. It suggests you invite your co-workers and schoolmates first, who then receive the invites as highly visible Facebook notifications.

BranchOut’s founder and CEO Rick Marini tells me the average user who enters the flow invites the Facebook-set maximum of 50 friends, and some go back to invite additional batches. Now the site is signing up 3 users per second, and was the 4th fastest growing app on Facebook this week ahead of Spotify and Pinterest. Facebook has free virality by the bucketload. You just have to know how to optimize it.

Get Cross-Platform. In Q4 2011, a single BranchOut engineer built a mobile web app in his spare time. In December it gained traction, by January it accounted for 25% of the service’s total traffic and now it represents a full 40%. In late February, BranchOut added the ability to invite Facebook friends via mobile, contributing to a doubling of its daily active users from 260,000 to 560,000 in just 3 days, according to app growth tracking service AppData.

While professional networking might seem like something serious enough to warrant web use, networking is still inherently mobile. By just putting 1 employee on the job, BranchOut got a big boost to its business. Mobile is worth experimenting with.

Do Whatever It Takes To Tip. Network effect services get better with every additional user, but they have to cross a certain threshold before they gain utility. BranchOut’s competitors are stranded below this tipping point, with Monster’s BeKnown supporting just 8,000 DAU and 200,000 MAU. [Update: Stats on competitor Identified have been removed as there were concerns about their accuracy]

Thanks to first-mover advantage in Facebook-based professional networking, multiple redesigns, tech celebs joining, some good press, but essentially zero marketing, BranchOut was able to claw its way above this mark. Now it’s snowballing because most invitees have already received invites from other friends, creating social proof that BranchOut is important. 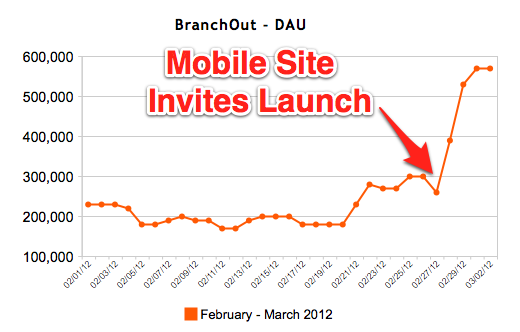 Marini tells me “It took LinkedIn four years before enough people were there. In network effect businesses, it’s not interesting to anyone at first. Slow, slow, slow. Then it picks up steam, and then everyone body piles on. Startups need to grasp this principle. If you have to raise funds and pay your way there, so be it.

Now that growth is taking care of itself, BranchOut has two more goals: scaling and monetization. The 50-person company with $24 million in funding is focusing on data architecture, because Marini says  “I didn’t expect growth to come this fast and this big.”

The network’s growth is also attracting more enterprise companies to its premium RecruiterConnect product, which already counts Microsoft, Target, and Allstate Insurance as clients. It’s recently signed partnerships with European job board giants totaljobs and StepStone. With a product that’s useful, a growth formula that works, and 800+ million Facebook users left to sign up, Marini tells me “These are fun times.”