Miami-based streaming music startup Senzari, backed by $2 million in angel funding, is continuing its international rollout today with an entrance into its third market since its U.S. launch into private beta last December. Today, the company is announcing that it’s dropping the invite-only status as it moves into Spain, where it has signed a strategic partnership deal with MTV Spain.

The site has also been redesigned with a “mobile first” approach that will help the company transition to smartphone and tablet devices in the near future. As a part of the redesign, an “Around You” feature taps into Facebook to help users discover the music popular with those that frequent a particular location. But that’s just the tip of the iceberg in terms of Senzari’s plans for social recommendations. The company is just two months away from the launch of a new algorithm which will help build stations based on data gathered from Facebook’s Open Graph, among other things.

Senzari is the fourth startup from serial entrepreneur Bill Hajjar, whose background is in wireless, mobile and the location-based service industries. The idea for his new streaming radio service is to take on Pandora by attacking some of users’ biggest pain points – namely international access and a larger catalog.

In December, Senzari began beta tests in the U.S. and Brazil, with a catalog of 10 million songs, as compared with Pandora’s 900,000. Today, Senzari COO Demian Bellumio estimates the catalog has grown to 11 million. But radio is programmed differently than something like Spotify, he says, it’s not necessarily about building the biggest catalog, it’s about ensuring Senzari has the right songs.

Like Pandora, Senzari is a radio service, not a download service or an on-demand one like Rdio, MOG, Rhapsody or Spotify. It doesn’t have to make deals with record labels to gain access to music, just distributers like SoundExchange, ASCAP, BMI and SESAC in the U.S., and others in different countries.

The company also wants to work with a partner as in enters new markets. For example, it previously partnered with RED Viacom (which represents ad sales for other Viacom properties, like Nickelodeon, VH1, MTV and Comedy Central). In Spain, Senzari lined up MTV Spain as a key ally. MTV will feature Senzari links on its website and promote the service to its 2.5 million followers on Facebook, Twitter and Tuenti (the “Spanish Facebook”).

But while the Spain launch is big news for the company, what’s perhaps more interesting (at least to those of us stateside) are Senzari’s plans for social. Although competitor Pandora already taps into Facebook users’ friend list for its “music feed” section as well as other social recommendations and sharing mechanisms, Senzari plans to go a bit further. 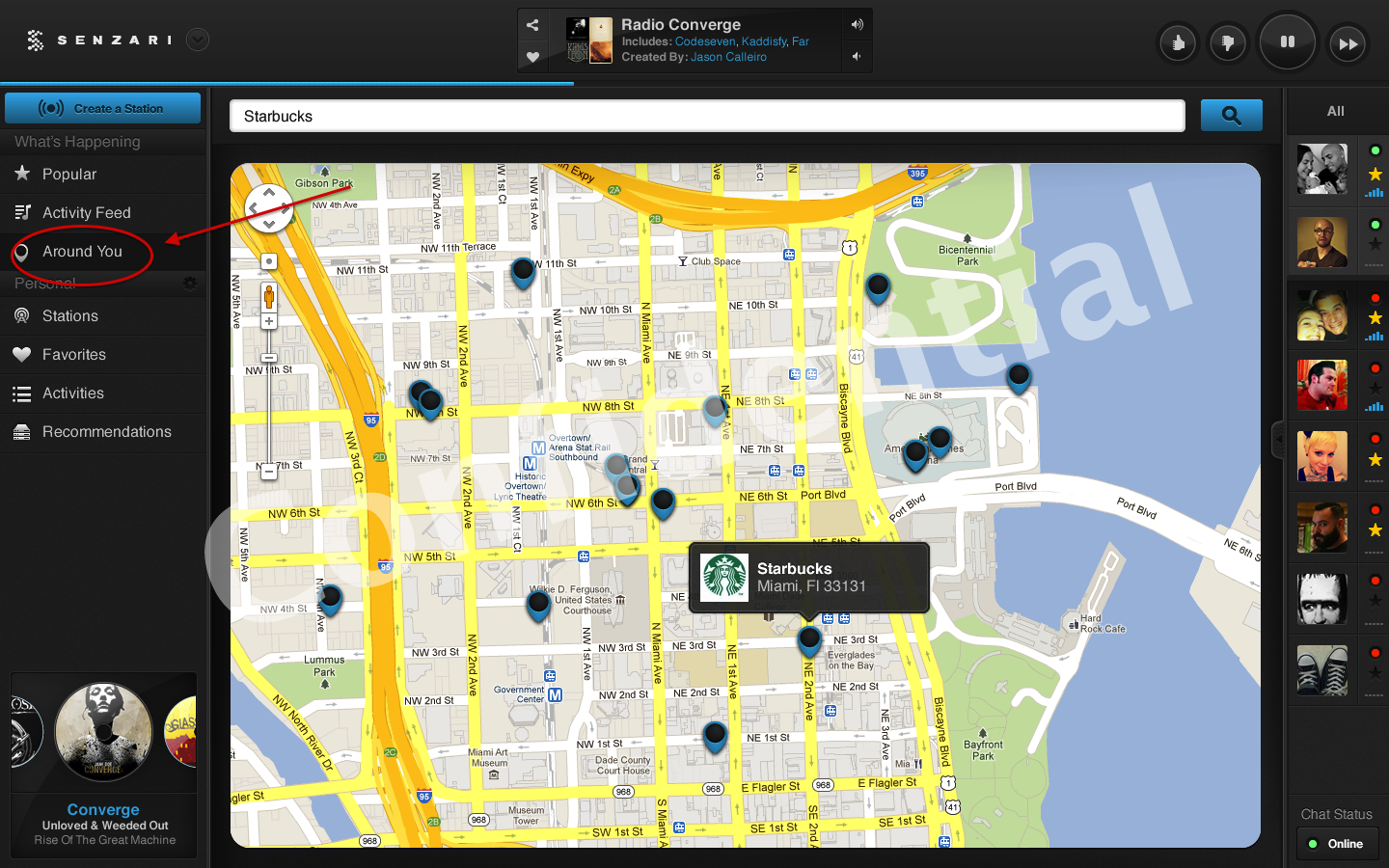 For example, with today’s redesign, the service has added an “Around Me” feature which combines check-in data from Facebook to algorithmically suggest tunes based on what people at a particular location (like a bar, coffeeshop, etc.) tend to listen to. That’s something no one else is really doing right now – a social, local, Facebook-based radio service.

In two months, Bellumio tells us that Senzari’s new recommendations algorithm will be ready, which will also tap into users’ Facebook social graph in new ways. While he’s keeping cagey on the details for now, it seems that recommendations will be powered by Facebook’s Open Graph, collecting data on what you listen to on other music streaming services as well as what your friends like. It’s the Spotify for Pandora users, in other words. This social data will be combined with other sources of information about your music listening habits, Bellumio says.

And as for the battle with Pandora, the now public music radio giant? Bellumio admits that being available outside the U.S. is key. “A big selling point in those markets is that there’s no Pandora,” he says, mentioning that he respects Pandora enormously, but that Senzari is after the first mover advantage outside the U.S.

Plus, he adds, “Senzari’s experience is lot cooler, and a lot richer…Pandora feels like it’s for a grandmother,” he boasts. “We’re for a younger generation that wants very sexy apps.”

In addition, “we can be a lot more innovative than Pandora,” he says, “given that we’re a small company and a pure startup.”

Those are big, bold claims, but stirring ones. Of course, it’s too soon to tell if the startup will gain the traction it needs to really take off, but building on top of Facebook is a good first step in building up the potential for virility.

The newly redesigned Senzari is available now to all U.S., Brazilian and Spanish users, no invite needed. HTML5 mobile apps will arrive next month, with their native counterparts to follow. 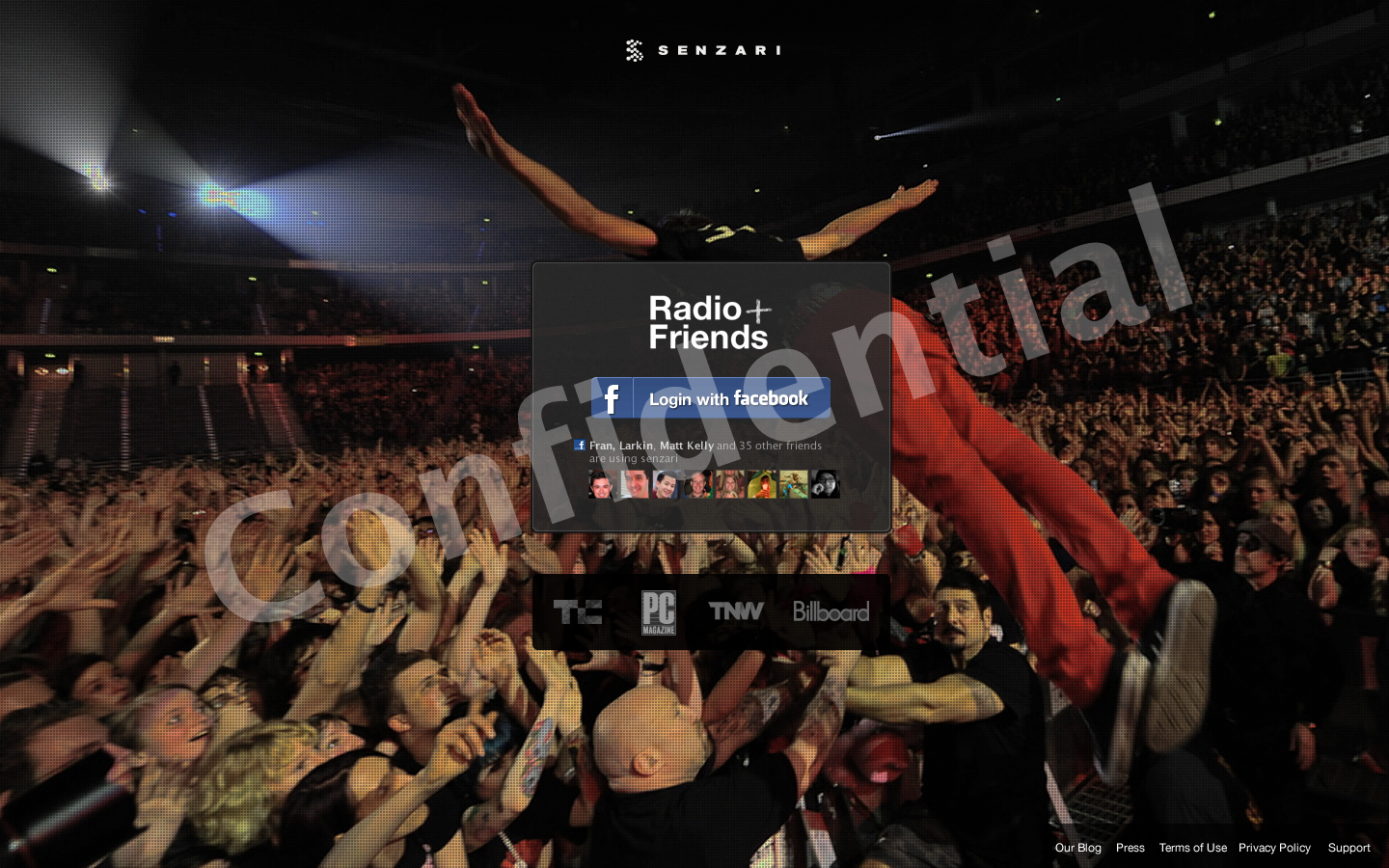