Snackr (no, not that Snackr!), is a new iPhone application that delivers personalized audio news in bite-sized chunks for listening to while on the go. The app offers you a “5 minute snack” of the current headlines, as well as audio streams by category, including topics like business, entertainment, tech and startups, “top news,”  and others.

But Snackr also has another cool feature, besides just serving up fresh audio news. The app delivers a daily greeting which tells you about the current weather, your friends’ birthdays, updates from your favorite sports teams, and more.

The app, coincidentally, arrived at a time when I was becoming frustrated with information overload (a regular occurrence), and tweeted out asking for suggestions of mobile apps that could read me my RSS feeds. BuzzVoice does an OK job at this but is $3.99 and then wants $3.99 per month to keep it ad-free. I’m also not a fan of the robot voice it uses – Snackr at least has a more pleasant, British-sounding robot reading the news.

The Snackr team never saw my original tweet, as it turned out, but when they reached out, the timing was perfect. Snackr is a great attempt at solving the info overload problem. As someone whose job involves keeping up with the fast-paced world of tech news, I often feel like I get behind on other news – you know, everything else that happens out there in the real world. When I finally have time to browse the news via Flipboard, or turn on the TV, or catch a little NPR, I don’t feel like I’m keeping up, exactly. I’ll catch a few stories, maybe, but it’s a hit-or-miss experience in terms of whether they were important or impactful . 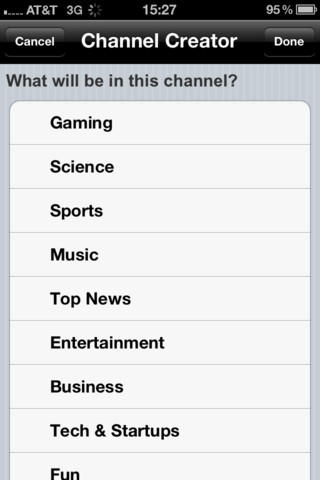 Snackr’s customized channels let you tune in to just the news that you actually care about, and it even lets you build your own channels from a large selection of categories like gaming, science, sports, fun, music, and more, or any combination of those. The channel editor still needs a little work, though. It doesn’t currently seem possible to delete custom channels, for example (or if it is, that setting is buried!).

I also wish that Snackr would let me customize the experience even further, by selecting individual RSS feeds or news sources to build a channel. At present, it only offers these pre-packaged categories for your custom channels. That’s probably fine for most people – this is more of a power user’s request, I imagine.

But overall, the app itself is simple to use. You tap to play/pause the audio stream, star to add an audio briefing to your favorites (so you can come back later and actually read the article in question), or tap the email icon to have the story sent to you. For even more automation, settings are available so you can have Snackr automatically email you your favorite stories or share those stories and your stream to Facebook. However, these were turned on by default, which I didn’t care for.

I should also point out that Snackr isn’t summarizing the news, or reading the full articles – it only reads the first paragraph. “Think of this as the audio equivalent of scanning headlines,” explains Snackr co-founder Jason Tongbai.

He and Snackr’s other founder, Brian Brunner, met in a class at Stanford, where Brian is now a senior. (Jason has since graduated). The company received a little bit of funding through Plug-and-Play’s “University Start-up Camp” program last summer, but is currently bootstrapping the app.

Jason says the idea for Snackr came to him while he was walking to class and trying to read the news on his iPhone. “I looked ridiculous, and then I was about a hair’s breadth of getting run over by a bike. If you look around today, this behavior – as dangerous and ridiculous as it is – is becoming more and more the norm rather than the exception.” He said he wanted to make news consumption less “dangerous” (ha!) while also offering a more personalized experience.

The app is still considered a “beta” even though it’s live in the App Store right now. Next week, Snackr will have a more public debut.