When I went to meet with Samsung to pick up the Galaxy Note, I was told something that I kept in mind throughout my last week or so with the phone. “People freak out and say it’s too big until they play with it — then they love it.” I was also told that the S-Pen is way more than just a stylus, and I generally felt excited to be playing with something different from your average Android phone. So what do I think now of the giant 5.3-inch S-Pen-packing Galaxy Note?

To put it plainly, I think they were wrong. Clearly the first thing we need to chat about here is size, and to be honest I think it may exclude quite a few people. It’s just too damn big. Now, many of you will cry foul because I’m a girl but here’s what I say to that: first, I have rather large hands for a girl, and secondly my male counterparts have confirmed that the Note is, in fact, too big to be comfortable.

Truth is, you just can’t perform one-handed actions with comfort and security. I felt like I was always slipping, almost dropping it, or simply working too hard to do what I needed to do. If you’re using the S-Pen that problem goes away a little bit, as you hold firmly with one hand and doodle with the other. But many of us only have one hand free to do what we need to on our phones, and that’s where the Note fails.

In terms of materials and build quality, I find this superphone quite handsome. It looks a lot like a Galaxy S II, and has this stitch-style texture on the battery door. It’s nice and light at at 6.28 ounces, and measures just .38 inches thick. The microUSB is square at the bottom of the phone with the S-Pen slot just to its right, while the volume rocker is on the upper left edge, and the lock button on the upper right.

I honestly don’t have much to complain about here except for the size. Everything feels solid, premium, and looks good too. I just can’t enjoy it because I don’t have XXL hands. I figured many of you would scroll to this section anyways, so I thought I’d save you some trouble and put it closer to the beginning. The S-Pen is great, but it’s not enough to justify the phone on its own. It’s fun, sure. You have a paintbrush, marker, pencil and highlighter; complete control over color and thickness, and can add text. You can drop in photos, crop, take screen grabs, and share everything. Plus, the S-Pen is pressure-sensitive, so it can even pick up light and dark strokes. It’s also got a little button that helps you perform shortcut commands like taking a screen grab (hold button, hold tap screen) or opening the S-Memo app (hold button, double tap).

I had a fine time tooling around and doodling all over pictures of my bosses, but even after a week I couldn’t really integrate the S-Pen into my daily life in any useful way. Mind you, Siri sets at least five reminders for me a day and sends at least two or three texts. It takes two hands to use it, which takes it out of the equation a large amount of the time, and it always seems like it takes longer to get it out and start using it than it does to just take care of it with touch.

Now, I’m not the most artistic person and I will say that my more creative friends have spent more dedicated time drawing than I have, and the products have been pretty impressive. However, the Wacom-style S-Pen can’t replace a real Wacom pen and/or tablet, or so says my graphic artist/animator friend.

So that really leaves it in a sort of middle ground: you can’t do real work with it, and you can’t make it useful in any other, daily-life kind of way. So basically it’s just for fun.

The Galaxy Note runs Android 2.3.6 Gingerbread under Samsung’s custom TouchWiz UI. The UI is tweaked a bit to make the most of the extra screen real estate, offering five virtual home buttons along the bottom and a 5×5 grid of apps/icons.

I’ve noticed with Samsung devices that both Android and TouchWiz slow things up. Samsung’s $50 Focus Flash runs like a champ on Windows Phone compared to this, and it has to come down to software. The good news is that TouchWiz actually adds some usability rather than just a heavy, custom look. Resizeable widgets actually allow for a little differentiation which is nice, but TouchWiz has a lot more subtle features that make it a bit more intuitive than other overlays. For example, when you scroll down the letters along the right side of your address book, you can swipe a bit to the left to move on to the next letter in the name. So if you have two dozen J names in your contacts, you can narrow it down to ‘Jo’ or ‘Ja’ or whatever.

Another plus is that Samsung’s HD Super AMOLED display is basically off wherever it’s black. The UI just so happens to be mostly black in all the menus and most apps can be configured to display light text over a black background, so that tends to help on the battery front.

Meanwhile, there are plenty of pre-loaded apps like Amazon Kindle, Qik Lite, Crayon phsyics and How To Draw (clearly for the S-Pen), and a host of AT&T apps. When I went into the Android Market to try out some games and such, a Gameloft title (NFL Pro 2012) was “not compatible with my device.” Bummer. Precision apps, on the other hand, like Where’s My Water and Fruit Ninja are much easier with the S-Pen. After a few tries I was getting some of my highest scores ever on Fruit Ninja. Good times. The Note’s 8-megapixel camera takes great pictures, no doubt. And if you have two hands to take the picture with then you’re in great shape, but otherwise good luck. I seriously had the most difficult time trying to hold the Note in one hand to take a picture of something in the other hand… it was a joke.

And it doesn’t seem like there’s a physical shutter button anywhere either, which means you have to find a way to get that thumb free and tap the little soft shutter. The good news is that the pictures are great, with really nice color reproduction and light sensitivity. The shutter is really fast and snaps the picture upon release.

The video quality is also really great, though it does take some time to switch between low light settings and outdoor light. But I found that the Note does this gracefully, a slow transition but at least it doesn’t seem really obvious during playback — a steady shift.

If you have the hands (the size of catchers’ mits) to handle it, the Note camera will treat you really well.

Comparison shot between the Galaxy Note (left) and the iPhone 4S (right): You’ve got to hand it to Samsung. They know displays. This 5.3-inch HD Super AMOLED is just about as good as it gets, except for the fact that I wish there was more of it. I wish it was a tablet, and the whole stylus thing could be seen as a great accessory (maybe for kids) and that no one would ever, ever have to hold one of these things up to their face ever again. Watching movies was awesome, and everything from pictures to the clock widget looks crisp, bright and beautiful. But again, all this real estate makes for more than a few issues during any regular usage scenario. I’m going to type text messages way more often than I’m going to grab a bag of popcorn and watch Inception on this thing, and if I can’t send a simple “Hey, sorry… I just got this text now…” to one of my dearest friends then what’s the point? There’s not really much to complain about here when talking about performance. The Note is pretty snappy, even with TouchWiz along for the ride, and things should get ever better once ICS makes its way onto the device. The biggest beef I had with the Note was during web browsing. Every time I scrolled or zoomed in on some text, the Note took an extra half a second to do what I’d asked. This is pretty common on Android, but worth noting.

Benchmark testing went well for the Note, too. The superphone scored a 2703 on Quadrant, which tests everything with a focus on graphics. Browsermark, on the other hand, gave the Note a 48,610. As far as AT&T’s network goes, I was surprised with just how great call quality was.

In the data department I was seeing an average speed of 24Mbps down and .8Mbps up.

If there’s one thing that really exceeded my expectations about the Note, it would be battery life. That massive HD Super AMOLED display and 4G LTE radio would lead you to believe that this thing wouldn’t make it past breakfast, but that wasn’t the case.

In real-world usage scenarios, the Note hung with me all day long. That’s not to say I could take it partying into the wee hours of the morning with me, but it’ll get you past dinner time. But I don’t know how you use your phone, so let me share with you some numbers. When we did the official battery test, we found that the Note lasts a little under six hours. We test this by really pushing the phone, running a continuous image search within the browser. At any time, I can come in and play a game or check something else out for testing, and then continue running the program. But at no point, whatsoever, is the phone resting.

Head-To-Head With The Galaxy Nexus And Streak 5: I applaud Samsung for thinking outside of the box on this one, but the issue with this type of exo-box-thinking is that I think it’s headed in the wrong direction. I understand that people are increasingly enjoying larger screens, as mobile video and gaming take over, but there has to be a line. Unfortunately, I think the Galaxy Note crosses it.

No matter how beautiful the display is or how fun (/useless) the S-Pen is, this thing is just too damn big to enjoy. I can’t tell you how frustrated I was doing even the simplest things like taking a picture, gaming, or even writing a text or search inquiry. And don’t even get me started on the kinds of looks I got holding this thing up to my face.

Perhaps if you have giant hands and can’t get enough doodle in your life, the Note might be right for you. But for anyone else, I’d recommend either waiting for the Galaxy S III (which is sure to be freaking awesome), or holding out for this rumored Galaxy Note 10.1 we’ve been hearing about. The Note makes much more sense as a cool tablet than it does a giant phone. 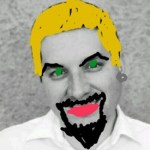 Check out all of our Galaxy Note review posts here.