Independent game studio LittleTextPeople made waves at GDC with an interactive fiction game. Now it’s been acquired by virtual world pioneer Linden Lab, who will use its team and tech to create standalone products outside of its sole game Second Life. LittleTextPeople says it brings a “simulator able to model social practices and individual personalities”. That means the new Linden Lab games could have the “rich emotional dialogue of a novel, rather than a fight scene in an action movie”.

The acquisition is Linden Lab’s first under relatively new CEO Rod Humble who previously built EA’s The Sims. In 2010, Linden Lab laid off 30% of its staff, and its old CEO resigned. Humble’s smart move to diversify the company shows his understanding that the world is not the same as when Second Life launched almost a decade ago.

In that decade, Second Life grew to pull in $75 million in revenue a year thanks to in-game land sales and taxes on player-to-player transactions. However it also, developed some serious problems that could sink Linden Lab if it doesn’t branch out.

Second Life in part revolves around its ability to let users create virtual objects and sell them for real money. The whole world is built on old, inefficient code, and if Linden tries to update it those virtual objects can break, triggering massive backlash from buyers and sellers. Meanwhile, the mobile and social game ecospheres have evolved, which while less flexible than the Second Life sandbox are drawing the attention of legions of gamers. 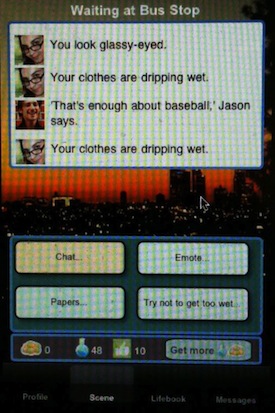 LittleTextPeople founders Richard Evans and Emily Short could help Linden Lab break into these realms. Their studio specializes in text-focused gameplay where players explore narratives built on emotional nuance rather than just mucking about a giant sandbox, as seen here in this game Dirolab reports the founders presented at GDC.

Extending the company’s legacy of equipping players with tools to alter the virtual worlds around them, Short said the new Linden Lab products to be released later this year will “will allow people to create their own stories in interactive mediums that have never existed before.”