Despite its long and boring name, Cisco’s “Visual Networking Index (VNI) Global Mobile Data Traffic Forecast Update” is one of the more fascinating data-filled reports you’ll read this year. The report examines the dramatic growth we’re seeing in the mobile Internet space, including the massive demands for mobile data, the growth of mobile video, and the rise of the smartphone as new gateway to the web itself.

Globally, mobile data traffic grew 2.3-fold over 2011, more than doubling for the fourth year in a row. The traffic even grew faster than Cisco had earlier predicted: they had pegged growth at 131% year-over-year. In actuality, traffic grew by 133%.

The mobile web’s growth, and its unending need for more data, more connectivity and more bandwidth, shows no signs of slowing. One of the top activities for mobile users in particular, is mobile video. For the first time, video accounted for over half of all traffic (52%). This is, in part, due to the increases in connectivity and phones capable of video viewing. By 2016, video will be over 70% of traffic. 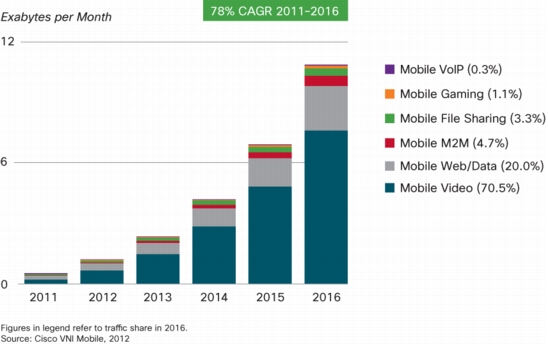 Video’s growth can also be attributed to the increases in devices that can do more, faster at greater speeds, which help to impact the global bottom line in terms of data usage. Case in point: 4G phones, only 0.2% of mobile connections, are already accounting for 6% of mobile data traffic. By 2016, 4G will reach 6% of all connections, but 36% of total traffic, or 9 times that of non-4G phones.

The top 1% of mobile data subscribers, meanwhile, account for 24% of data traffic. And smartphones as a group, still a minority representing only 12% of the total handsets in use today, now account for over 82% of global handset traffic.

In some cases, mobile cloud apps are video apps (think YouTube and Netflix), but other times they’re music (Pandora, Spotify), gaming, or social networking apps. But the increases in mobile connectivity have allowed what would otherwise be limited hardware devices to function as tools for media consumption. 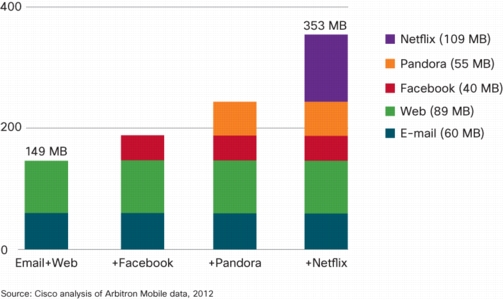 A user with an 8 GB smartphone who streams music and video will consume more content over 2 years that can be stored on the device itself. And a smartphone owner who uses Netflix, Pandora and Facebook will generate more than twice the volume of traffic as generated by a smartphone owner only using email and web apps.

Smartphones are growing in popularity and usage, too, as indicated by the increases in the group’s data traffic demands. In 2011, the average smartphone usage nearly tripled, up from 55 MB/month last year to 150 MB/month today. By 2012, over 100 million smartphone users will be using over 1 GB/month of data. And by 2016, the monthly global smartphone data traffic will pass 10 exabytes per month, with the average smartphone generating 2.6 GB/month, a 17-fold increase from 2011’s average. 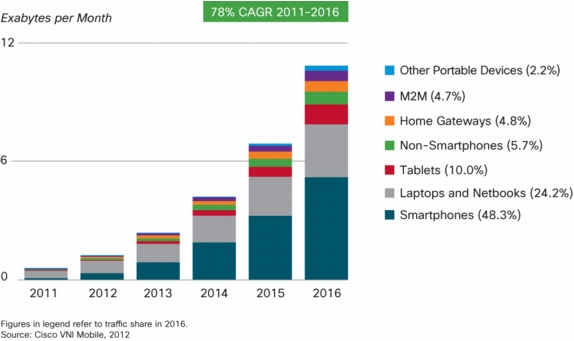 Even though the perception in developed markets like ours is that smartphones are everywhere, the majority of the mobile market is still using basic handsets. In 2011, these devices accounted for 88% of the mobile landscape, and their mobile data usage increased 2.3-fold to 4.3 MB from 1.9 MB last year. In other words, even “dumb phones” are getting smarter, and capable of consuming more mobile data.

But the mobile web is no longer accessed by handsets alone. Tablets are a growing group, too, with their own data demands. The number of mobile-connected tablets tripled last year to 34 million, each generating 3.4 times more traffic than the average smartphone (517 MB/month vs. 150 MB/month for smartphones). By 2016, tablets will be 10% of global mobile data traffic.

Or, in what may be my favorite number from the report: by 2016, mobile-connected tablets will generate almost as much traffic as the entire global mobile network does in 2012, 1.1 exabytes per month. (The global network will reach 1.3 exabytes/month next year). Think about that: the tablet Internet will grow that quickly to become the size of this year’s mobile Internet. If you’re working on anything in the mobile space and have put off addressing how you’ll meet the needs of the tablet user, you’re already behind. And it goes without saying that if you’re building for the web and haven’t addressed mobile, you’re basically just lost. 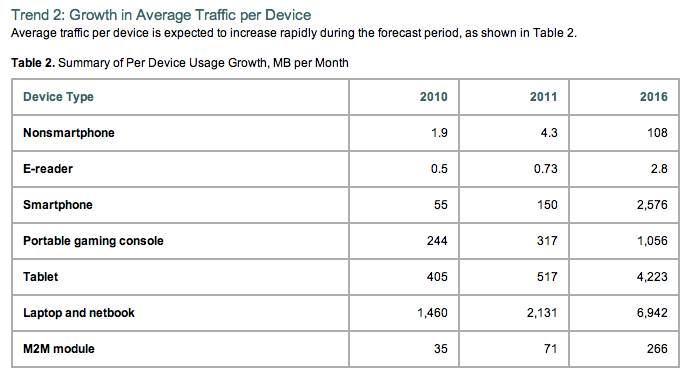 Finally, what good mobile data could refrain from weighing in on the Android vs. iPhone battle? In terms of data consumption, it appears Android is winning (well, using more data – I’m not sure if that’s “winning.”) As Android apps are freer to run in the background, the figure is not so surprising. But this is also a function of Android’s increased global market share. Today, Android devices’ data consumption is 29% higher than Apple devices in terms of megabytes used per month per connection. 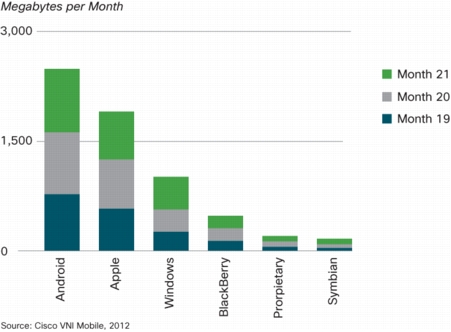