Clear, the heavily-anticipated touch-based to-do list app, is launching in the iTunes App Store tonight. And by heavily anticipated, I mean this app was getting tech blog coverage based on demos, previews and teaser videos.

Why the big draw for what’s typically been a rather ho-hum app category, the lowly to-do list? Clear is pure eye candy, for starters. But it’s also representative of a major leap forward in smartphone app design, as it’s been built from the ground up for the touch interface. The app is based solely on the use of now-common gestures: swipes, pulls and pinches. There are no buttons with Clear, and yet, it’s surprisingly simple to use. In fact, that’s the point.

If your current to-do list app needs are complex, you may not be in the market for Clear. But if you’re regularly turning to a simple to-do list app, or even the iPhone’s built in notepad to make your lists, Clear is definitely going to wow you. 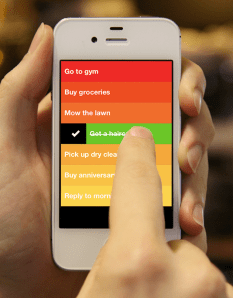 The app is unique in that it forgoes common navigational elements – like buttons positioned either at the bottom of the screen or towards the top – in favor of an all-gesture interface. If you don’t know how to swipe and pinch, you could be lost for a second upon first launch (err, mom). But Clear’s design is meant to tap into what’s already common knowledge among smartphone users: you can swipe, pinch and pull down on on-screen elements to interact. Who needs buttons?

Somewhere, Steve Jobs, no fan of buttons (obviously – look at the iPhone, there’s just the one) is smiling.

With Clear, there are only a few gestures you need to in order to use the app: pull down on a list to add an item, swipe to the right to complete an item or to the left to delete it, pinch apart two items to insert a new one in between, and pinch vertically to close the current list and see all the lists in the app. Lists are also color-coded with a heat map to show the most pressing tasks at a glance. (See video below).

That’s it. It’s a quick learning curve, and what’s more, doing away with buttons can actually speed up the process of using to-do lists once you realize that’s how it’s done. Clear even pushes you to simplify here, too, by limiting to-do items to just 30 characters.

“There’s so much crap trying to get your attention in other to-do apps, you don’t even bother typing things in on the iPhone app version,”  proclaims the app’s co-creator Phill Ryu, “with Clear it’s so fast it’s sometimes even fun.”

But is the world ready for a buttonless app?

“Yes!” Ryu says, “Have you seen babies play with an iPad? They love swiping and manipulating things directly one-to-one on the screen. There’s nothing more natural than that on a touchscreen device.”

He’s got a point. This weekend, I watched in amazement as a one-and-a-half year old unlocked the iPad, tapped a folder, launched Netflix, browsed the queue and launched his favorite cartoon. Jaw-dropping, really. Clear is the kind of app that’s been designed for him, and for this new generation of smartphone users who grew up with gestures. Forget backward compatibility for those sad sacks who remember Windows and other things with archaic user interface concepts like “menus” and “buttons.” Design for the future. How can you not love the idea?

The app itself has an interesting background, too. It’s a joint project between Realmac Software, Milen Dzhumerov, founder of The Cosmic Machine and Clean Cut Code, and a new studio called Impending Inc. This is the first launch for Impending, which was founded by tap tap tap partner, the above-mentioned Phill Ryu and David Lanham of the Iconfactory. Prior to Impending, the team has been involved with a number of high-profile and popular apps, including Twitterific, MacHeist, Classics and more. Not a bad way to kick off your studio’s debut.

Impending has also been working on another project for the past year and a half, but isn’t talking about the details just yet. They’re working with a very talented team, however, including some of the “usual suspects.” And yes, we’ll probably be obsessed with that app, too.