Matchbook was founded under the simple belief that mobile technology can make people’s lives easier — not just in the interest of early adopters and tech enthusiasts — but for moms and grandmothers, and the many non-tech-savvy people out there. Once upon a time, if you wanted to remember, say, a restaurant you loved or wanted to try, you went in and grabbed a branded matchbook from that venue. (Those were the days when smoking actually gave people use for those matchbooks.) The rise of mobile devices transferred that behavior into note-taking apps of all varieties. Matchbook then took those mobile notepads and built an app to enhance that experience, allowing users to more easily remember those must-visit places they hear about from friends, blogs, or just in passing by.

Essentially, Matchbook is like Foursquare or Yelp, minus the check-ins, reviews, and social networking — just a simple bookmarking feature for favorite places. While this may sound a bit too pared-down for the taste of tech enthusiasts, you have to remember that there are a lot of people out there who don’t use Foursquare, who aren’t comfortable or used to checking-in at every place they visit, or voraciously social networking while on the go. So Matchbook offers users the ability to organize all of their to-dos by neighborhood on a map layout, search bookmarks for date spots, find the best of those bookmarks, along with top places flagged by other users — to name a few.

The app’s target demographic has been predominantly women, in their late 20s and up, who aren’t particularly interested in social networking inherent to many of today’s apps, or social recommendations, they simply want a more interactive way to bookmark their favorite places.

Since its launch last summer, Matchbook has collected a hefty amount of data on their users’ intent, what places they plan on visiting, and so on, and as it goes, advertising against intent is inherently more effective, so the startup is today taking the next logical step: Serving users deals from the places they actually plan to patronize. 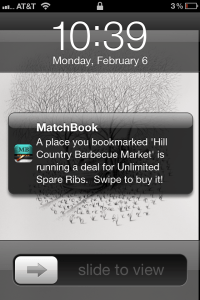 Matchbook’s new intent-based deals product alerts users when a place they have bookmarked is running a deal on sites like Groupon, LivingSocial, and Gilt City, reminding users of their favorite venues, through user-specific offerings at discounted prices. Naturally, if, for example, LivingSocial happens to run a deal for that new restaurant in your neighborhood you’ve been meaning to try, Matchbook will send users a notification allowing them to buy the coupon. The more venues a user bookmarks, the more useful and targeted the service’s deals become.

Matchbook represents a category of apps that eschews certain aspects of the social revolution, using social features only sparingly to create what Matchbook Founder and CEO Jason Schwartz hopes is a more intimate user experience. Most apps focus on deals that are already around you, or trying to create serendipity by serving you deals in realtime as you walk through your local neighborhood. Of course, when people are out and about, the majority of the time, they’ve already decided where they want to go to eat or shop. By keeping track of the places users want to go in the future, Matchbook is taking somewhat of an alternative approach, by focusing solely on the businesses users already plan to patronize, which just sounds like smart business.

Thus, the value proposition here is that Matchbook is collecting valuable data around venues and user intent, and there’s little that is more valuable to advertisers, brands, and businesses than getting a sense of where people plan to shop and eat in the near future.

The app, which is available on the App Store today (and will be coming to Android and other platforms in the future), has also garnered the attention of investors. Corresponding with its new deals feature, Matchbook is also announcing that it has raised $250,000 in seed funding from Quotidian Ventures and from Percolate, Mashape, Nestio, and Foursquare investor (and Co-founder and former COO of the Barbarian Group), Rick Webb. 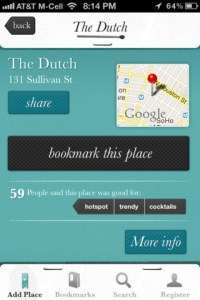 The New York City-based startup plans to use its new infusion of capital to help fuel its growth, ramp up hiring, and develop apps for other mobile platforms. Though many of Matchbook’s users aren’t interested in the majority of social features, Matchbook still plans to find the best ways to integrate social functionality to enhance the user experience.

But, no doubt that serving users with a simple bookmarking app that lets users make personal notes and add tags to each places entry, along with being able to do so offline, and serve them with relevant deals to places they already want to go, could be a great way to increase the likelihood of users following-through on intent and, in turn, patronizing those local businesses. Even if this doesn’t solve the problem of creating loyal customers, it does help turn intent into action among a much coveted demographic of mainstream female shoppers.

Matchbook’s app is free to use, so to monetize its new deals feature, the startup will be taking a cut of all daily deals purchased through its app. Each daily deal site has its own affiliate program, but the average is about 10 percent going to referrer. To make a significant chunk of change, Matchbook will have to help sell a lot of deals, but with intent in its favor, the startup thinks that it can get more bang for its buck.

To learn more about Matchbook, check out the startup at home here.