OMG. Pinterest now has over 10.4 million registered users, 9 million monthly Facebook-connected users, and 2 million daily Facebook users, according to Inside Network’s AppData tracking service. With gorgeous photography, and links to shopping sites, Pinterest is becoming an obsession for flocks of women. And they’re not afraid to show it, I mean, Like it. AppData and Facebook’s advertising tool show that over 97% of Pinterest’s Facebook fans are women. 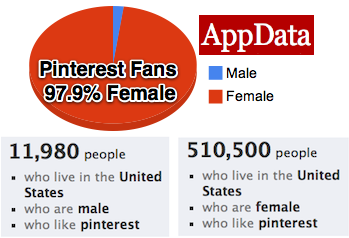 The stunningly feminine fan base could be a telling proxy for Pinterest’s actual user base, which totals over 10.4 million considering that’s how many users follow the official “Pinterest” account.

Even though it was co-founded by three men, the site’s not shy about courting women. It’s About page describes that “People use pinboards to plan their weddings, decorate their homes, and organize their favorite recipes.”

Sure, dudes can do all those things too, but they’re probably not addicted to pinning tuxedos and power tools like women pin brides dresses and bundt cakes. Pinterest’s easy-to-use Pin It bookmarklet and the joy of curation is keeping ladies and gentlemen engaged. [Update: Pinterest also employs aggressive reengagement emails to notify users when their friends join, which may be assisting growth but annoying users.] 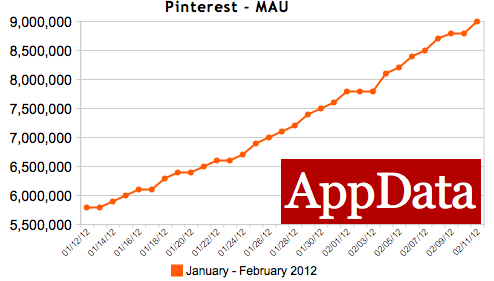 Over 1/5 of its fast-growing Facebook-connected monthly user count use Pinterest each day. At the start of 2012 the daily user count was just 810,000, but now its at 2 million according to AppData. This week comScore said Pinterest hit 10 million U.S. monthly unique visitors faster than any independent site in history.

There are so many beautiful things to share, and they don’t deserve to slip into obscurity at the bottom of our Twitter feeds and Facebook profiles. Pinterest gives people the chance to say “I love this, and not just today. This helps define me.”

[Image Credit: Married To The Sea]