Over the last decade the major music labels — and their trade organization, the Recording Industry Association of America — have established a repeated pattern of attacking consumers in the name of squelching illegal file-sharing. Piracy, they claim, has been the industry’s undoing, accounting for an over 50% drop in sales since 1999 (the industry likes to discount the impact of legal per-song music downloads via services like iTunes, and the myriad other changes facilitated by the rise of high-speed Internet connections).

Their efforts to combat piracy are often draconian: threatening tens of thousands of people with lawsuits claiming obscenely high damages; attempting to coordinate their threats with consumers’ ISPs; and, most recently, supporting legislation like SOPA and PIPA that would undermine the fabric of the Internet. Hell, Universal once pulled down a 30 second YouTube video of a dancing baby because the baby had the audacity to dance to a Prince song.

Which is why my jaw dropped when I saw that VEVO, a property jointly owned by some of the biggest record labels in the world, was showing a pirated stream of an ESPN football game at its Sundance PowerStation venue last month — on no fewer than two televisions, and a pair of laptops.

First, some background. VEVO is a sort of ‘Hulu for music videos’ that’s owned by Universal Music Group, Sony Music Entertainment, and the Abu Dhabi Media Group. EMI (which Universal and Sony are in the process of acquiring chunks of) has licensed its content to the site. Together, these labels comprise three of America’s ‘Big Four’ music labels — Warner Music being the lone holdout. And these Big Four make up the vast majority of the RIAA.

So when you hear about the record labels suing people, or trying to get ISPs to clamp down on users, or trying to pass legislation that could destroy the web as we know it — a lot of these people are behind it. 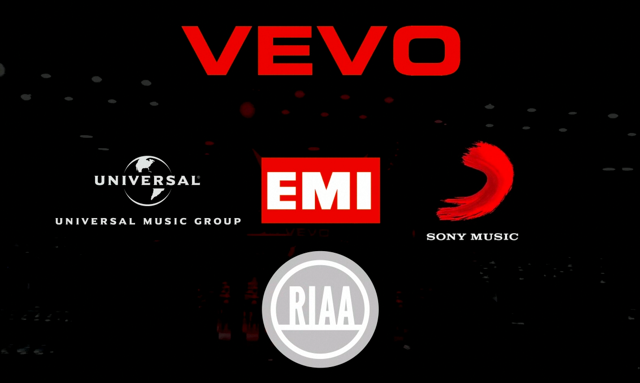 Back to the story.

The scene at the VEVO PowerStation was fairly typical for a Sundance event. VEVO and a pair of other companies had taken over a local venue, emblazoning their logos on the wall in bright red and replacing the normal drink menu with an array of cleverly-named concoctions designed to help you forget you were sipping liquor at three in the afternoon. Celebrities strolled through at regular intervals, making rounds through the bar before they headed over to a room set aside to pick out their gift of furry Sorel boots.

The event’s redeeming factors, at least as far as this reporter was concerned, were the tasty hamburger sliders and the Patriots v. Ravens playoff game on ESPN that was playing throughout the venue. That is, until the game was rudely interrupted — not by a commercial break, but by a bizarre buffering warning.

In hindsight, I should have noticed it immediately. The shoddy video quality and jitters clearly didn’t belong to an HD feed, despite the ESPN America HD logo in the lower right hand corner. And then there’s the fact that ESPN America isn’t even available in US markets (it’s a UK-based station).

But between the blaring music and having James Marsden (Cyclops!) standing three feet in front of me, it wasn’t until the pirate flags were fully unfurled that I finally noticed them. First the buffering message appeared, then a mouse cursor — controlled by forces unseen — flew onto the TV to exit out of full-screen mode and refresh the page. I think it may have also closed a few popover ads.

At this point I tried to figure out the origins of the feed. As far as I could tell, the stream itself was coming from a Spanish-language live-streaming site called TuTele.tv. But that feed had apparently been accessed via a site called Frontrow.tv, which is itself an aggregator of live sports streams. At first glance, neither site looked particularly trustworthy. 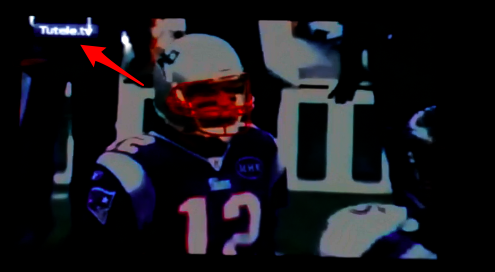 But copyright on the web is a notoriously complex issue, so I went to the source to verify my suspicions: ESPN. Which confirmed that neither site has the rights to stream its content. In other words, yes — that game was indeed being pirated. In fact, Frontrow.tv has since apparently gone dark, likely as a result of a recent crackdown by federal authorities on sports sites with pirated content.

Given that the venue probably had access to a cable subscription (or perhaps an antenna, given that this was broadcast over the air), I’m not sure why it would decide to go the piracy route. But I do have a strong suspicion that it was done primarily as a matter of convenience.

The next day, when I made a return visit to the VEVO PowerStation, the football game obviously wasn’t on. This time the TV screens were playing VEVO music videos, which were being coordinated to match whatever celebrity was currently in the room — Tommy Lee walked in, and his music video serendipitously started playing, then the same thing happened when Deadmau5 made an appearance.

My hunch is that the team hooked up a computer to the TVs throughout the venue so that they could accomplish this synchronized star-caressing — then, rather than rework their entire setup just to play the football game for a few hours, they opted for the easier route and looked for a stream on the web.

Which perfectly underscores everything wrong with the media industry’s approach to piracy. They’ve long made out pirates to be lawless thieves who think they’re entitled to receive everything for free.

But the reality is far less black-and-white. Sure, there are some people who will duck the bill when they can — but many of them were never going to buy the content they downloaded in the first place. And a huge swath of ‘pirates’ are driven to their ways because it’s easier to stream or download something via an illegal site, not because they’re averse to paying for content. Stick a bunch of DRM and ads in front of the media they’ve already paid for, and they may opt to go with the path of least resistance next time.

Oh, and if the venue had wanted to stream that football game online legally, they would have had a tough time doing it: the only NFL licensee that offers streaming games is DirectTV, which requires you to purchase an entire season of ‘NFL Sunday Ticket’ in order to stream a game from the web. For a mere $350.

Reached for comment, VEVO unsurprisingly tried to shift any blame: it says that the event was produced by a creative agency called Continuum Entertainment, and that there were several other companies involved. However, the venue was broken into different sections, and the televisions in question were clearly those belonging to VEVO’s PowerStation — and VEVO confirms that the televisions were supposed to be used to showcase VEVO videos and “original content”. VEVO also claims it wasn’t aware the game was being streamed and that it turned it off once it realized that it was (though it was on the entire time I was there, a period of at least thirty minutes).

As for who actually decided to play the stream, or why, VEVO says the public had access to the computer being used so they can’t say for sure who exactly was responsible. Which is dubious (and almost certainly spin) — there was clearly someone actively controlling the computer, because they refreshed it when the connection stalled, and I’m pretty sure it wasn’t a random attendee who was taking the helm. Must have been one of those nasty pirates.

In any case, were it the music industry that was on the other side of this, you can be sure they’d dismiss all of the aforementioned explanations without a second thought. And then they’d probably assess damages in the realm of $20,000 per down.

We’ve reached out to ESPN to ask if it will be pursuing legal action against VEVO, Continuum, or any of the other companies involved with the event.

Update, 2/10:: ESPN says it will not be pursuing legal action. A spokesperson gave us the following statement:

“We’re disappointed the exhibitor took this route, especially at a festival for an industry whose jobs are most at risk if we are not able to curtail stolen content.”