After hitting 2 million members at the end of last month, design shopping startup Fab.com is today rolling out new iOS applications that offer a number of new features and improvements. In addition to an updated layout, search and navigational elements, one of the apps’ biggest new features is the inclusion of the recently launched new storefronts called “Fab Shops.”

These Fab Shops went live late January, allowing Fab.com members to visually browse through products via dedicated online storefronts that were organized around product categories, as opposed to by designers. That way, if you wanted to shop only for jewelry or furniture, for example, you could simply drill down into those items using the new Fab Shops option. Shops could also be sorted by both popularity and price, when they launched on the web.

With today’s mobile and tablet app updates, the shops section is split into “pop-up shops” and “more shops,” and a sort button lets you rank them by price, by bestselling, most favorited, or by “random” (the default). There are now over 20 shops to choose from. 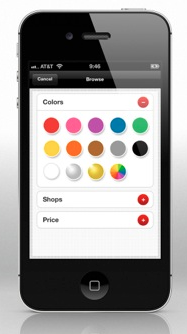 Next to the shops button at the top of the screen, are buttons that let you see just “new” items, or those that are “ending soon.”

Also new is an updated browse menu that lets you find products by shop, price, or, in an Etsy-like fashion, by color, also featured which launched first on the web.

Fab says that mobile accounts for a quarter of all of its orders, so it makes sense that it would continue to evolve the mobile experience to match up to that of the web. Given these statistics, however, it may even be prudent to design mobile-first for the next round of updates.

The new apps are in the iTunes App Store now, so check for updates. Fab is hinting at a new “iPad-specific” app in the works that’s coming soon, but nothing more on what that will involve just yet.