Lance Tokuda was one of the masterminds behind viral apps on Facebook back at the end of last decade. He cofounded and led RockYou as its chief executive through the evolution of the Facebook platform, all the while inundating users with hugs, horoscopes, birthday cards and other lightweight social app communications (which some may refer to as “spam”).

RockYou ended up finding its business in social advertising and social gaming, and in late 2010 Tokuda stepped down from his CEO role. Now he’s back with a new company on Facebook today, called schoolFeed, that’s trying to connect older users with long-lost high school classmates.

Designed as a Facebook canvas app and a standalone site that you use via logging in with your Facebook identity, schoolFeed basically creates a new layer that looks not dissimilar to myYearbook, Tagged and other entertainment-focused social networks that have survived Facebook’s world domination. But It’s going after Classmates.com, which charges a fee, by providing its service for free, and by mining Facebook data to discover missing connections.

At this point you might be thinking, “hey wait, isn’t this what people already use Facebook for?” Tokuda’s response is that Facebook has not offered class-based high school search for years. There’s no way within Facebook, currently, to specifically search for class year. Instead, you just see everyone who ever went to the school (albeit you can piece together quite a bit of your old class by seeing who you have friends in common with). Tokuda also says that most older users have relatively few classmate connections on Facebook, based on the research he’s seen.

Take a closer look at the app and you can see that there’s a lot more going on than anything Facebook is trying to do. 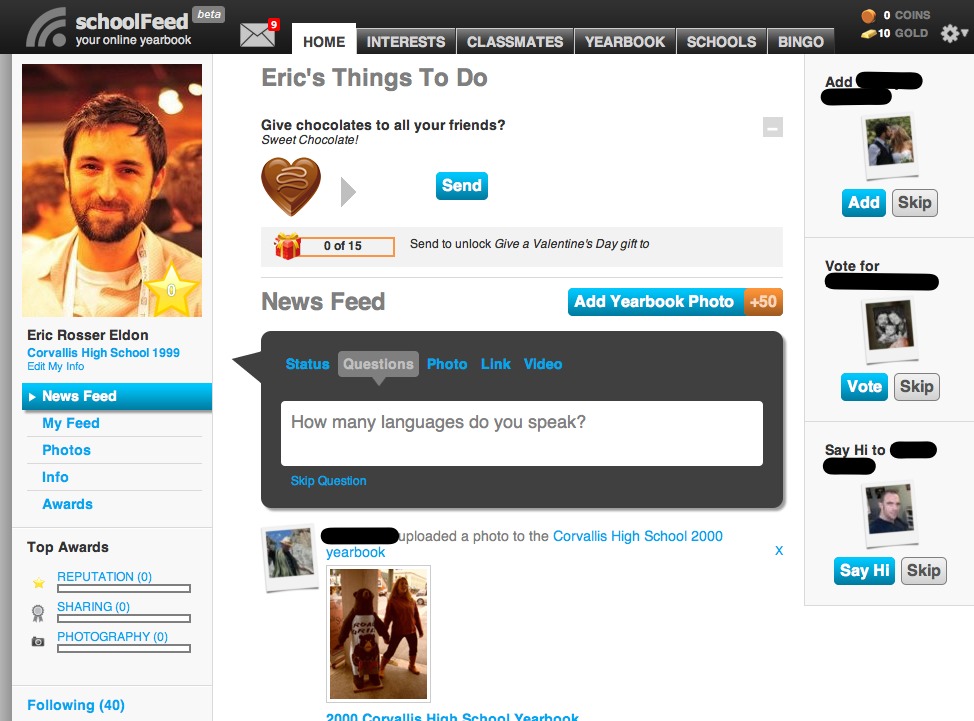 First off, the app has its own news feed, that shows you activity from people that it already knows you went to high school with. And yes there’s a feature to help users plan real-life reunions. It also has a virtual currency system built in, that it uses to reward users for creating engagement — posting status updates, inviting friends and the usual types of incentives like that. The earnings can then be spent on games like Bingo, or on accessing real-life yearbooks. Via a recently introduced feature, one user from each high school can have their yearbook professionally scanned and uploaded in exchange for a bunch of virtual currency. Then, every other user who went to the same school pays using their currency to access each page in the book. From my understanding, one page is free each day but you pay if you want to flip through faster than that.

The app does work fairly hard to strike a balance between virality and a quality user experience. For example, you can’t pile up the points by repeating the same actions over and over again. But if you become a serious user you’ll still find yourself blasting out a lot of messages.

The site and app launched seven months ago, and so far it has been booming. It has more than 7 million registered users and nearly half a million daily active users, according to Tokuda; AppData meanwhile shows it hitting DAU numbers far higher than that on some days.

When I asked Tokuda if he was interested in building a fuller-featured social network, he did say that he’d like to build out more features for young users as well, but that the focus is going to stay around classmates not anything else.

The company has also convinced some RockYou investors to go in on it, too. It’s announcing what it calls a “seed” round of $1.75 million led by First Round Capital, with CrossLink Capital, Interwest Partners and SK Telecom participating.