We first covered Finnish startup Ovelin back in June, when it was preparing for the release of its interactive, gamified app for the iPad that helps teach youngsters how to play the guitar, and having some fun while doing it. Like others before it, Ovelin’s mission is based on the fact that learning to play an instrument is challenging. The process is slow, and the exercises one has to go through — they don’t tell you about this in Rolling Stone — are boring and tedious. It’s for this reason that instrumental education is fraught with dropout, as many novice musicians end up retiring before they become shredders.

Ovelin developed WildChords as a fun way for beginners to learn guitar, get over those musical hurdles, and seek everlasting musical glory. It does this by plying some of the Guitar Hero model to music education, using audio technology to recognize the sound of your guitar through the iPad’s microphone, recognizing the chords you’re playing, and turning your geetar into a controller.

Today, the startup is announcing that it has raised $1.4 million in seed financing, led by VC firm, True Ventures, which has invested in Kicksend, Schematic Labs, Fitbit, Bandcamp, and more. The startup will use this infusion of capital to further develop WildChords, and extend the concept to teach beginners how to play instruments through desktop and mobile games. Simply put, Ovelin wants to change the way people learn how to play an instrument, and they’re of the firm belief that interactive, musical games are the way to do that. 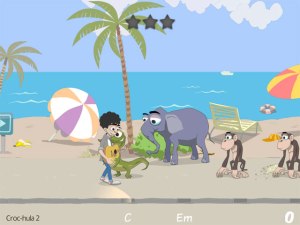 At this point, WildChords is only available on the iPad, but Ovelin is in the process of developing apps for other mobile platforms. The iPad app officially launched in mid-November, and racked up over 100,000 downloads in the first month alone. Since then, it’s gone on to rack up a number of accolades, including becoming the Best European Learning Game of 2011 according to LUDUS, was nominated at the IMGA Awards for most innovative games of 2012, and was a finalist in the SXSW Music Accelerator this year.

WildChords was developed to evaluate users’ performance and offer feedback in realtime, coursing through levels in a gaming narrative that is what Ovelin calls a “modern Pied Piper of Hamelin” story. It’s great for kids and beginners alike, and once the free content has been completed, users can get access to additional content through in-app purchases within the game.

It’s great to see a Finnish startup receiving some real validation from a Silicon Valley VC fund, and it will be interesting to see if Ovelin can ramp up its team and provide engaging games for a variety of instruments and skill sets.

We’ll continue to update. But for more, check out Ovelin at home here.