In case you happened to be the victim of a day-long coma yesterday, it was a very exciting day for Mark Zuckerberg, Silicon Valley, and that quaint little social network we’ve all come to know, love, and be terrified of. Facebook filed its S-1 on Thursday with the crystal clear intent to go public on a market near you very soon, and will be raising $5 billion ahead of its IPO at an expected valuation of between $75 and $100 billion.

The company’s filing revealed some significant (or perhaps mind-melting) stats, including the fact that Facebook is seeing 845 million users every month, half of whom are daily users, and half of whom are mobile users. Zuck still owns 28 percent of the company, among other things; really that was just the beginning.

In fact, there was so much excitement and noise around Facebook’s IPO yesterday that the volume of visitors looking to check out Facebook’s filing for themselves succeeded in crashing the SEC’s website. Hitwise tells us that SEC.gov apparently saw a 15 percent increase in total visits, compared to the day before and a 42 percent compared to previous Thursday. And guess who was the number two source of traffic for the site? That’s right, TechCrunch.com — coming in less than 3 percent behind the top source, Google.com. Thanks to you, readers, we gave the SEC all the traffic they could handle. And apparently more.

Today, Heather Dougherty, Director of Research at Hitwise shared some further stats, which provide a great follow-up to yesterday’s IPO madness. Yes, a $75 to $100 billion valuation is enough to marinate on, but just how much traffic — and what kind is — Facebook.com generating? While this data is from January, many readers may already be familiar with a lot of this, but it’s just further evidence of how colossal Facebook’s share of the market has become — both at home and abroad.

Furthermore, in terms of engagement, the average visit time on Facebook.com is 20 minutes, and breakdown of male to female in Facebook’s visitors, shows that the social network is more popular among women, as 57 percent of its traffic for the last 3 months, ending January 28th, came from the ladies. 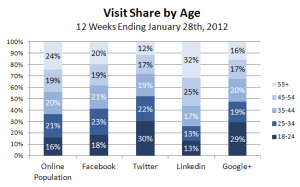 Meanwhile, the ages of Facebook.com visitors shows that the breakdown of its its visit share by age compares favorably to the online population, as you can see in the graph to the right.

As Erick said yesterday, Facebook managed to report $1 billion in profits for 2011, which is a fairly exact number, considering all of the variables at play. It could be that Zuckerberg managed accounting to come out at this round, even number, a sign to investors that the company has everything completely under control. Investors love predictability.

And on that note, beyond the average of 20 minutes users are spending on the site, 96 percent of of visitors to Facebook.com were returning visitors in January 2012. Hitwise’s numbers also show that, in terms of reaching affluent users, Facebook’s size allowed the site to win 499,949,430 visits from the most affluent income group, ahead of YouTube at 223,732,591 visits and Twitter at 15,166,795 visits. Facebook makes billionaires and caters to them.

Internationally, Facebook.com remains in the top market in every country aside from China, due to the influence of China’s Facebook and Twitter competitors, Sina Weibo, Baidu, and Renren, which are the largest generators of traffic. The social network’s largest web footprint is in Canada, where it captures 12 percent of all visits in the market.

With all the excitement around Facebook yesterday, it really comes as no surprise that Facebook.com is, according to Hitwise, “the largest website in the U.S. and a top performer in numerous international markets.” The loyalty, engagement, and sheer number of monthly users proves that this company is, simply put, a freak of Internet nature. The social network has spread across the Web with its sharing functionalities, Facebook Connect, and is bringing social to just about every industry imaginable. Zuck’s proposed goal of making its social graph portable and fundamental to the fabric of the Web has certainly been realized, as it played an integral role in the rise of Zynga, social gaming, is making eCommerce social, music, and on and on.

For more on the Hitwise data, check out the post here.

And here’s more of TechCrunch’s coverage of Facebook IPO Day: