WiGig, a multi-gigabit speed wireless communications technology, was first announced back in 2009, but it’s taking companies like Panasonic quite a while to come up with applications that make use of it. Via WiGig, devices can communicate with each other at multi-gigabit speeds using the 60 GHz frequency band.

Panasonic has developed a prototype system, in which WiGig is embedded in a tablet that can wirelessly transmit data like photos or videos to displays mounted in the passenger seats of a car. That car has to be nearby: while Wi-Fi typically has a transmission range of about 30m, WiGig’s range is just 1-3m (Bluetooth: around 10m). 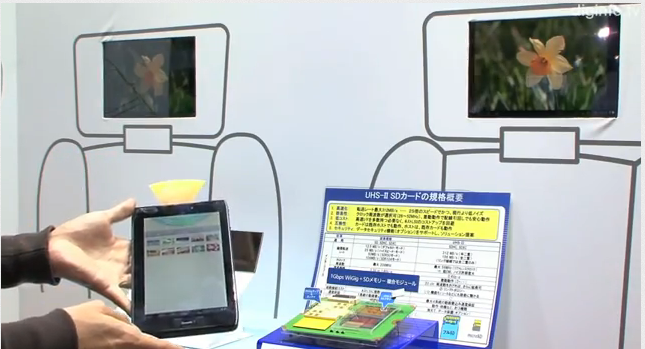 The tablet you can see in the video embedded below transmits a “full DVD video” in 60 seconds, according to Diginfo TV (which shot the video). WiGig, in the 1.1 specification, boasts a data transmission rate of up to 7 Gbit/s.

Panasonic is currently in the process of developing WiGig SD cards that are supposed to be commercialized in summer next year. WiGig-compatible phones are apparently on their way, too.