It seems like ages ago that HP announced that webOS would continue to live on as an open source project, probably because they’ve been awfully quiet on the subject since the big reveal in December.

Well, consider that silence officially broken. HP took to their webOS developer relations blog to tell what faithful users still remain all about how their open-source rollout is going to work, and the whole process has begun with the release of their Enyo application framework.

Enyo should be a familiar name to anyone who has developed a TouchPad application, but the 1.0 release was understandably focused on creating webOS-specific apps. Now that HP isn’t leaning on webOS to grow their stake in the mobile space, they’ve open-sourced Enyo 1.0 to make it easier to migrate existing apps to other platforms.

To that end, HP has also included in today’s release what they’re calling “the core” of the updated Enyo 2 framework, which further expands the number of platforms that Open webOS apps will be able to play nice with. Developers will be able to write an application once, and have it run within Chrome, IE9, and Firefox (not to mention mobile devices) without a hitch.

Today’s releases are just the tip of the iceberg though, as HP plans to pepper the next few months with newly open-sourced components. These releases (see below for the full breakdown) will continue in drips and drabs until September, when HP expects to open-source push to be complete and will rename the project Open webOS 1.0.

I for one am thankful that webOS has been given another lease on life, and I can’t wait to see what all of the mad, brilliant developers out there will do to it. We’ve all seen Android-to-TouchPad ports, but I’d love to see someone try and get webOS up and running on a Galaxy Nexus. It seems that the sky will be soon be the limit for webOS, so long as developers don’t get tired of waiting around. 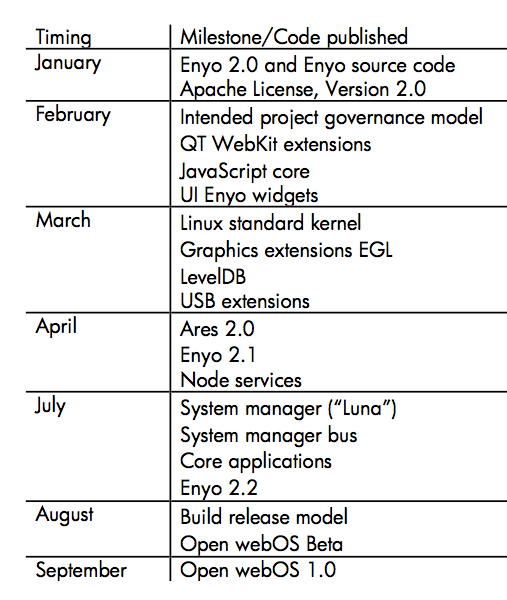