[Editor’s Note: The Stop Online Piracy Act, the House bill that wants to give content holders vast new powers to block web sites in the name of copyright protection, has been delayed despite an extensive lobbying campaign. The reason was widespread online opposition. Hunter Walk, co-creator of #BlackoutSOPA, explains in the article below how his site was able to help rally web users to the cause — and hit upon the new reality of activism in the process.]

At 1pm on Monday January 9th, Greg Hochmuth and I launched #BlackoutSOPA, a site that lets you alter your Twitter profile pic to display SOPA opposition. 15 minutes later the site went down due to more traffic than we expected. That demand was just the beginning. Over the next 10 days, tens of thousands of people used the tool to reach tens of millions of their followers.

Since then, #BlackoutSOPA has received coverage in the Wall St Journal, TechCrunch, the New York Times and several other prominent sources. And the community members ranged from Ashton Kutcher to Occupy Wall Street. There was no 1% or 99% – just 100%. #BlackoutSOPA started because Greg and I wanted to see how we could find other people who cared about stopping the flawed “anti-piracy” bill, but it ended up teaching us about the future of online activism. Here’s some of what we learned, plus a few thoughts on what SOPA was trying to do, and why we were fighting it.

A) Treat it Like a Startup: New Features Every Day

The site launched with just a single function, but we had a long list of features to add going forward. Some we never found time to implement (remember this was a nights & weekend project), but overall there was a rapid iteration focusing primarily on distribution — how could we make it more effective for our users to reach their communities? We provided a few links to other SOPA/PIPA resources but our goal was never to provide information. We also had no interest in expanding beyond changing your avatar. Later when we shifted to “take more action” it was by linking to other services such as Meetup or PublicKnowledge.org rather than building our own. It was pure minimum viable product and focus on what we could do best. Some notable post-launch improvements:

The feedback and support we got kept morale high. When someone like Google’s Matt Cutts praises you, it’s the equivalent of downing an energy drink. Matt wrote us: “I was really impressed that BlackoutSOPA just worked. It was easy to use, right down to undoing avatar pictures. Iterating quickly–every few hours, they introduced a nice new feature or made BlackoutSOPA more viral. Within a few days, practically everyone in my Twitter stream had a “STOP SOPA” badge. This is what future political organizations should look like: easy to start but engaging and hyper-adaptive.” Yes!!!! 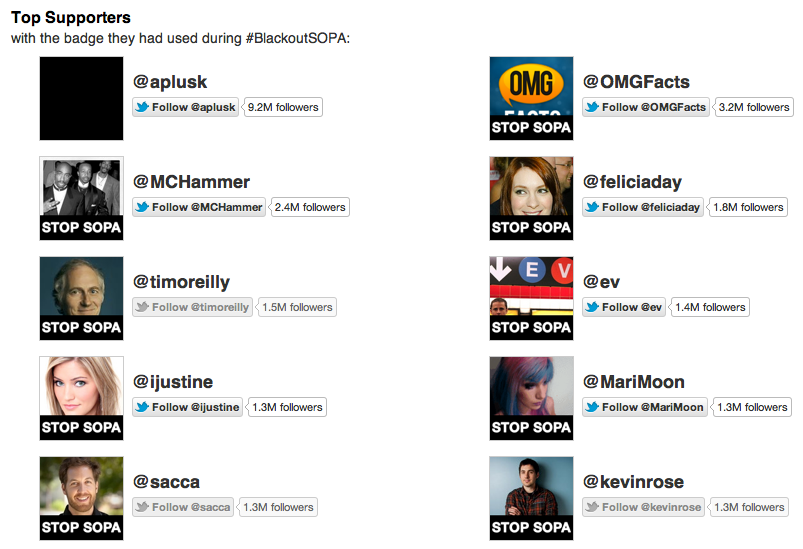 B) Started With People We Knew, But Grew Because Of People We Didn’t Know

It was pretty amazing and personally satisfying to see our leaderboard on Day 1 filled with friends. While most (all?) of these folks certainly opposed SOPA, I do believe it took a personal appeal to ensure they converted into early adopters. Early tweets from Fred Wilson, Brad Feld & MG Siegler actually took down our website 15 minutes after launch due to their large followings.

But my contact list turned out to not be enough and soon I was getting stuck within my own echo chamber. The tech influencers provided validation and quickly got us to ~2,000 members but we weren’t getting spread, not jumping across to artists/musicians/creatives and other segments. So we played a big card: @MCHammer.

Having grown friendly with Hammer over the last five years, I knew he could be a bridge – someone with feet in both technology and popular culture. Someone who mainstream press would react to – no one brings smiles like the mention of Hammer. And someone who wasn’t afraid to take a stand. My intuition was correct and within a few hours of shooting Hammer an email, he’d joined #BlackoutSOPA with a modified Twitter avatar and a tweet of encouragement to his 2.4 million followers.

With Hammer wind at our back, I started to go hard after people on Twitter using two strategies:

1) Hit more tech influencers with stats & social proof – eg “@timoreilly join @fredwilson & 5k other #BlackoutSOPA members. Change your Twitter picture via www.blackoutsopa.org.” By this time, most heavy tech Tweeters were definitely seeing our badges in their stream. And early coverage from TechCrunch (our first article!) and Business Insider gave me some awesome cut quotes to make it appear that EVERYONE was jumping on board (“The Craze That’s Taking Over Tech People on Twitter Today”). These folks also started preaching to their networks – Dave McClure and Paul Graham both pinged their respective 500 Startups and Y Combinator lists yielding a ton of young founders and hot startups like Pinterest joining the protest.

2) Searched Twitter for top tweets on SOPA and encouraged those folks to join. This was surprisingly effective – I didn’t just look for notables with large follower counts. Anyone was game, and they converted in pretty high numbers. I’m fairly certain this is also where we got the OccupyWallStreet and Anonymous crowds involved.

Phase 3: New Media Influencers Fight for the Internet – On Our Way to 85k!

Right as the general wave of SOPA interest hit (at our peak on Wednesday the 18th we were above 30 new users per minute for the entire day!), we finally crossed out of pure tech. The Lonely Island, iJustine, Felicia Day and several other creatives came on board. Boom! SOPA became both trendy and of general interest. It was the spread we needed and also provided some additional jolt to the community. A friend wrote a blog post about us on Hypebot starting discussion among musicians. We were now diverse enough to be perceived as a platform for the protest. I’ll admit to a smile of satisfaction here — it was awesome to see such a wide variety — we had the ‘Dick in a Box’ guys but also John Perry Barlow, Grateful Dead lyricist and EFF co-founder. When Ashton Kutcher joined later in the week it was the perfect ending.

Although 85,000+ people eagerly joined #BlackoutSOPA we weren’t without detractors. There were two types of criticism we saw over the 10 days.

1) “If changing you Twitter avatar were an effective form of political activism, our current president would be a Mad Men cartoon.” – Anil Dash

Look, I get that it’s hard to cause a revolution from your Aeron chair, but I think Anil and others who thought there wasn’t any political value to this exercise are just plain wrong. The idea behind #BlackoutSOPA was to get the already converted to take a persistent and visible action through social media. This would then spill over to awareness of the issue among their followers and display enough momentum to get the press involved. I believe we accomplished all these goals – media reports and “What’s SOPA?” replies to folks like @ijustine who helped the effort expand outside the echochamber.

There’s also a reality to where we are right now with social media and politicians — they value it, perhaps even overvalue it. Why? Because it’s visible and still hard to measure. And because their kids and the media are on it. So to have tens of thousands of people, some very notable, showing a collective action means something. And then once we had you as part of the community we started displaying actions you could take: tweet at these senators, call these congressman and so on. To friends like Bryce Roberts who said “actions speak louder than avatars,” my response was simply “great! if you want to voice your support by getting more involved, by any means necessary.”

A single caveat to my insistence that social media campaigns are a net positive for causes: beware the “RT if you oppose killing kittens” trap. What I mean is, simplistic statements without goals and which can’t evolve into action are meaningless. And even worse they cause ‘goodness fatigue’ – you feel as if you’ve already done your part and are thus less likely to engage again when a specific request comes.

2) “So you advocate piracy”

I had a few spirited exchanges with friends or colleagues from the media industry who suggested that me directly or the Silicon Valley elite more generally were putting forth a morally bankrupt stance in order to financially benefit. My answer was simple: Piracy is wrong. Creative systems need commerce to survive. IP deserves protection whether it’s code, art, written word, music, video and so on. But SOPA & PIPA aren’t the answers because they overreach, they don’t address the changes in technology since the DMCA was passed and they have a chilling effect on creative talent. This last point wasn’t discussed very often but it’s at the heart of my opposition.

A law which allows entire sites to be taken down due to accusation of infringement by its nature favors large companies. They are the ones with the legal, PR and financial resources to fight for their rights. In fact these resources actually serve as a way to force cooperation from creatives and the tech industry. It’s like nuclear weapons: “Don’t screw with us and we won’t screw with you.” If SOPA were to pass, I would expect that creators would increasingly find it necessary to run back to the arms of corporations as opposed to going direct to fans.

This unbundling of talent from corporations is perhaps the most powerful and interesting business threat to today’s entrenched players. And SOPA/PIPA would have a secondary effect at creating another reason for middlemen to exist besides directly adding value to the talent.

Let’s take the recent example of Louis CK distributing his 60 minute comedy special directly to fans and attempting to build out a platform to continue doing this ongoing. Today if there was a rights dispute over a piece of content he had on the site there would be a DMCA process designed to resolve. If his entire site could be taken down would someone like Louis CK be running a different calculation on the benefits or challenges of self-publishing? I don’t want to sound like too much of a bomb-thrower here – it’s not that I believe corporations are inherently corrupt, I just want middlemen, distributors and managers to truly add value. I don’t believe 99% of the SOPA/PIPA supporters were cackling evil suits who immediately wanted to destroy the web. I just think there was more of a tolerance for collateral damage within the media industry than makes sense for the American economy to tolerate.

It was an amazing two weeks. We don’t intend for www.BlackoutSOPA.org to be an ongoing resource, although we’ll keep the technology alive for as long as people want to sport the badge (make support issues notwithstanding). On Sunday we turned the site into a call for finding more reasonable, balanced solutions with links to organizations in that spirit. We also memorialized the effort of the community: 87,204 people with combined 78 million connections. Spanning arts (Ashton Kutcher, MC Hammer) and technology (Evan Williams, Chad Hurley, Tim O’reilly). And even entire companies such as Pinterest came on board. Thanks web, we were proud and glad to serve you.

Hunter Walk enjoys writing about the impact of technology and product design at hunterwalk.com. You can also follow him on Twitter via @hunterwalk or add him to your Google+ circle. You can keep up with Greg Hochmuth at dotgrex.com and via @grex on Instagram and Twitter.