Bnter, an app that allows you to share your conversations with others publicly, is rebranding today as Banters and adding a number of new features to both its iPhone and web apps.

In the same way you share photos via the web or your mobile phone, Banters allows you to share snippets of conversations you have with friends on the web. While the startup initially focused on SMS, Banters broadened its scope to allow users to share any sort of conversation, including GChat, in-person chat, email and more.

The original iteration of Banters required launching the app or visiting the web page, opening up a new post, attributing someone to the conversation, filling out the different message boxes with who said what, adding tags, then finally posting. As co-founder Lauren Leto explains, this was too arduous of a process for users.

With the new version of the iPhone app, Banters will now let you use Siri’s technology to input your conversations. You simply hit the microphone button on your keyboard while creating a post and repeat the quote you want to save. Leto says she wanted to make adding a conversation to the app as easy as taking a photo with your mobile phone.

With mobile and web apps, you can now attribute however many people you want, and include as many lines of conversation for messages (previously you could only list three back-and-forth conversations). Banters has also added a “like” button and an activity stream. A new ‘Explore’ tab will help surface the best quotes on Banters to everyone in the community. And Leto says that the startup has added the ability to mark posts as private.

As for the name, Leto says that Banters is much easier to pronounce for the app’s 60,000 users. Banters has raised seed funding from a number of high-profile investors including Founder Collective and SV Angel, and others. Check out Leto explaining why she founded the startup in this Founder Stories clip. 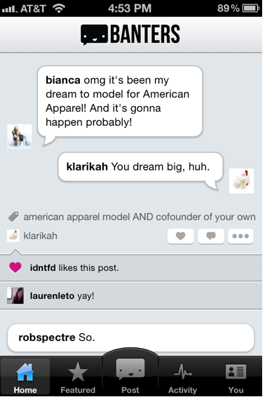