Tired of looking at Android apps that are decidedly more homely than their iOS counterparts? Google is too — and it’s finally doing something about it.

Today the Android team has launched an official ‘Android Design’ portal, featuring an extensive guide outlining UI best practices that developers should work to use as they’re building their apps. You can find the new site right here.

Android’s visual shortcomings have been well documented (you can find a video of me discussing this issue with Android’s Director of User Experience, Matias Duarte, right here). In the old days (say, when the original Droid launched) it really was often downright ugly — and the apps were even worse, with buttons that did unexpected things and UIs that looked generic and amateur.

Things have gotten a lot better since then. Android’s OS updates have progressively gotten better looking, and Android 4.0, Ice Cream Sandwich, is a huge step forward. But third party apps are still an issue — there are some exceptions, but generally speaking I still find that iOS apps are better looking than they are on Android.

This may help change things. There’s a lot of material on the site, which includes sections on general style guidelines, design patterns, and ‘building blocks’ that are part of Android’s default UI — and each section has numerous subsections. The guide has an emphasis on UI elements introduced with Android 4.0, like the Roboto font, so owners of older handsets may not see the benefits immediately, but it’s definitely a good move for the long term.

That said, most of the anecdotal stories I’ve heard about the difficulty in building Android apps have been related to the developer tools (and the fact that developers can’t make ‘pixel-perfect’ designs as they can on iOS, because there are a variety of screen resolutions they have to accommodate for). Thankfully we’re hearing that improved tools are on the way as well, and last week’s news that all Android 4.0 handsets that include Android Market will include the default ‘Holo’ theme will also be a big help — though it will be a while before the majority of users are running that OS. 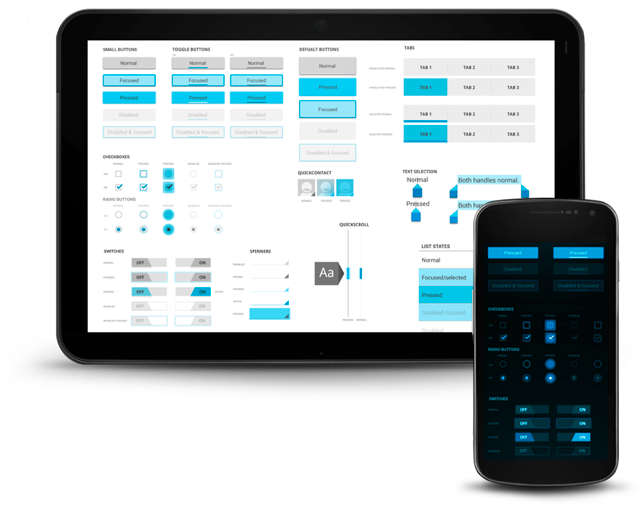