Last year, in its first year, the Google Science Fair became the largest online science fair in the world with over 7,500 entries from more than 90 countries. Google Science Fair, which is in partnership with CERN, The LEGO Group, National Geographic and Scientific American, is open to students around the world who are between the ages of 13-18. Today, Google is announcing the second annual Science Fair, with an emphasis on making the contest even more global.

Similar to last year, contestants can build and submit a project (via photos and videos), a hypothesis, as well as written observations online using Google Sites Either individually or in teams of three. This year however, Google will be accepting submissions in 13 languages (compared to English-only last year).

Prizes include a trip to the Galapagos Islands with a National Geographic Explorer, scholarships and real-life work opportunities (i.e., a 5-day trip to CERN in Switzerland). This year, Google is also issuing a new reward, called The Science in Action award, sponsored by Scientific American. This award goes to a top science project that addresses a social, environmental or health issue to make a practical difference in the lives of a group or community. For example, a project that seeks to eliminate power outages in rural India (this was an actual project from 2011, although the award did not exist then). Google says there are a separate set of judges for the Science in Action prize.

Google will choose 90 regional semi-finalist selections, 30 each from the Americas, Europe-Middle East, and Asia Pacific. 15 finalists will be invited to Google headquarters in mid-July to present their projects to a panel of judges. The winner will receive a $50,000 cash prize, one year of mentoring to help realize their project goals, and will also be flown to Mountain View in July to be recognized alongside the other finalists.

We sat down with Cerf to chat about the success of last year’s fair and his ambition’s for this year’s contest. “I can’t think of anything more exciting that getting people interested in science and technology,” he tells me. One area which he is particularly excited about is Google’s openness to accept submissions from other languages. In terms of the criteria judges will be looking at, the best projects will have originality, an enthusiasm for science and technology, adequate data collection and results and the hypothesis.

Of course the judges have a hard task on hand, as Cerf says the quality of submissions from last year were extremely impressive. Lauren Hodge won in the 13-14 age group and studied the effect of different marinades on the level of potentially harmful carcinogens in grilled chicken. Naomi Shah took the stop spot in the 15-16 age group and endeavored to prove that making changes to indoor environments that improve indoor air quality can reduce people’s reliance on asthma medications.

And Shree Bose won the 17-18 age group, and overall prize, discovering a way to improve ovarian cancer treatment for patients when they have built up a resistance to certain chemotherapy drugs.

“It’s always a struggle to choose between best science and wanting to make sure that someone in each age group gets credited,” Cerf explains.

As for Cerf himself, he can’t recall any of his favorite science fair projects from when he was an adolescent. He favored entering math and chemistry contests, he tells me. 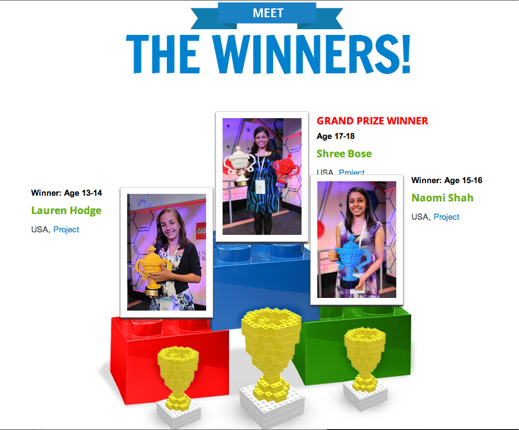