Customer experience analytics company ForeSee recently released data on which e-commerce companies had the most customer satisfaction in 2011. Amazon and Amazon proved to be among the winners, with Netflix falling last year in terms of sentiment. Foresee has done a similar study on satisfaction for retailer mobile commerce sites, and it looks like once again Apple and Amazon are head and shoulders above the competition in terms of customer satisfaction for mobile commerce, via both apps and the mobile web.

As we’ve noticed over the past year, mobile commerce has taken off and continues to grow exponentially as more and more consumers use their smartphones for research, shopping decisions and purchases. Because of this trend, ForeSee compiled data from consumers to produce statistically reliable mobile satisfaction scores for 16 of the largest e-retailers in the United States. Apple and Amazon, which scored 85 and 84, respectively, on the study’s 100-point scale, topped the list by a wide margin.

According to the research, shoppers are generally more satisfied with traditional websites than they are with their mobile counterparts. The average mobile satisfaction score for the 16 retailers measured in the report is 76, compared to 79 for the same companies’ websites.

However, a few companies had comparable performance on mobile and web: Apple (a standout with a mobile score two points higher than its web score), Toys “R” Us, Best Buy, Staples, Netflix, Dell, and Blockbuster. Others reveal large gaps between the website and the mobilee xperience, including Avon (satisfaction 8 points lower on mobile) and Walmart (7 points lower).

Mobile shoppers most likely to make a purchase from another channel (the traditional website, a store, or a call center) are those who shopped on Amazon (87) and Apple (81), followed closely by Best Buy and Avon (both 79), Staples, Barnes and Noble, Victoria’s Secret, and Target (all 78).

Another observation that ForeSee noted in the study is that mobile shoppers who are highly satisfied with their mobile experience are 54% more likely to consider the company next time they want to make a similar purchase, and twice as likely to buy from the retailer’s mobile channel again.

Basically, now more than ever, it is critical for retailers to build out their mobile sites. And online retailers, like Amazon, are definitely catching on to this, and developing innovations in the m-commerce space. Retailers, especially brick and mortar stores, that ride the mobile wave are going to miss out on a huge opportunity, and customer satisfaction (and sales) will undoubtedly suffer. 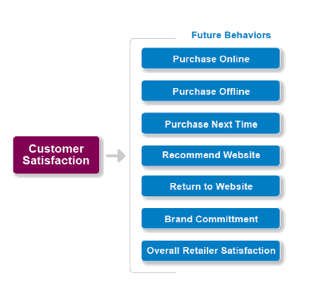