One of the unending debates in blogging circles is about the value of comments. How do you encourage the best comments and discourage the anonymous trolls? Do you even need comments?  Or do you enforce civility by requiring real names, through the use of Facebook comments (which is what we currently use on TechCrunch) at the expense of discouraging conversation?

But there is a middle ground between anonymous commenters and those with real names: commenters who use pseudonyms. People use pseudonyms for many reasons, often because it better reflects their online persona or they simply want to separate their identities for different activities. New data from Disqus, the commenting platform, suggests that pseudonyms both encourage more and better comments.

Okay, but what about the trolls?  Disqus maintains that only does allowing pseudonyms produce more comments, but the quality of the comments is also better, as measured by likes and replies. Disqus maintains that 61 percent of pseudonymous comments on its system are positive in that regard, versus only 34 percent positive for anonymous comments (I knew it!) and 51 percent positive for comments made using real names. People who use pseudonyms post better comments on Disqus. Their comments are liked more and generate more discussion.

On the negative front—comments that are marked as spam, flagged, or deleted—both anonymous and pseudonymous comments are poor quality 11 percent of the time.  Comments under real names are negative 9 percent of the time, so a little bit better than the other two but not by much.

Would this data hold true across other commenting systems? It is hard to say. Disqus allows for pseudonyms, and they are obviously popular on that system. People who register for a Disqus account get verified, and then can pick another name under which to comment. People can comment anonymously as well.

Pseudonyms appear to be a promising middle ground for commenting systems. You want to be able to block or downgrade bad actors (spam, hate speech, etc.) without discouraging the much larger number of legitimate commenters who may not want to use their real names. Should all blogs allow for pseudonyms in comments? Please comment using your real name below :) 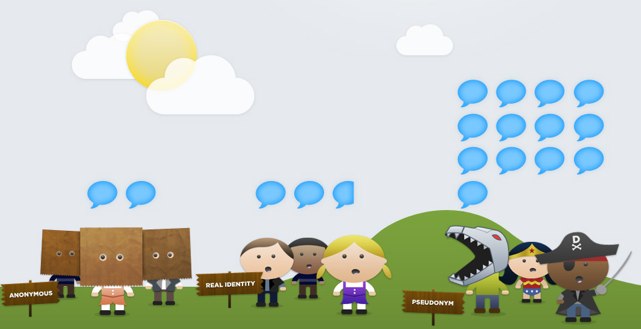