At this point, video is just a regular part of the web. But how is it gaining on regular TV watching. Just in terms of audience reach, Nielsen estimates that almost 145 million people watch video online in the U.S., compared to about 290 million who watch traditional TV. So the penetration of online video is already about half of the overall TV-watching population.

In this light, online video still has a long way to go before it can hope to match the time spent in front of the TV in the living room. Except it’s not quite so simple. Remember, these are averages across the entire population and across the entire Internet. When you drill down into the watching patterns on the biggest video sites on the web, a different picture emerges. 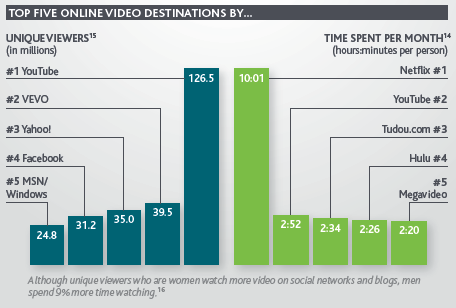 The real outlier in terms of time spent is Netflix, which boasts an average of 10 hours a month per viewer. Viewers spend about four times as much time on Netflix than on any of the other top 5 video sites, including Hulu. People tend to watch 2 hour movies on Netflix instead of 30-minute TV shows or 3-minute video clips, which explains the difference in time spent.

Compare the 10 hours on Netflix to about 130 hours a month for TV, based on the weekly numbers cited above. The gap is still huge, but not as vast as the average numbers between TV and online would suggest. And the number of hours spent on Netflix, Hulu, YouTube, and the other top video sites will continue to expand rapidly, narrowing that gap. How long will it take Netflix to go from 10 hours a month (the equivalent of 5 movies) to 20 hours or 50 hours?

When it comes to video, time spent is the best measure of audience attention. As the leading video sites command more and more of our time, advertisers and major media companies will notice. The more time we spend on these services, the better chance they will have to compete on an equal footing with cable TV channels. It is still early days, but once we are nearing an inflection point, and once we reach it, the video industry (both online and off) will change very rapidly. 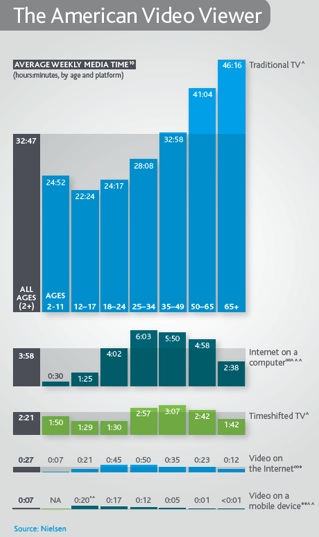