On November 30 2011, Spotify made a bold move: it became an application platform, allowing third-party apps to live within the walls of Spotify’s official application so that they could take advantage of the service’s full-song streaming and tight Facebook integration. The revamped Spotify went live last month, and there are 13 third-party apps now available as part of the App Finder.

One app is especially straightforward, and it’s also surprisingly fun. It’s called Top10, and you can find it right here.

Top10 is a UK-based startup that does what its name implies: it lets you build and browse top 10 lists of just about anything — from your top 10 favorite vampires to top 10 Will Ferrell movies. And on Spotify, it lets you and your friends quickly build out top 10 song playlists.

Now, you’ve been able to build out lists of your favorite songs on Top10’s site for a long time, but because this app is built into Spotify, the experience is far more engaging and fun.

Click on a friend’s playlist of, say, their Top 10 favorite Rolling Stones songs, and you’ll immediately be able to start listening to those songs in their entirety — or you can queue them up to listen to down the line. You can also opt to build out a Rolling Stones playlist of your own, and Top10 will tell you how it stacks up against your friends’. You aren’t restricted to making band-specific playlists, either — plenty of lists are much broader, like the popular ‘Top 10 songs of 2011’ and ‘Top 10 Party Tracks’.

And it looks like the app is getting plenty of traction. Top10 CEO Tom Leathes says that since launching the app on Spotify three weeks ago (when Spotify launched its app platform), users have visited the app some 450,000 times, and have recommended over 100,000 songs. Perhaps more important is the high level of sustained engagement it’s seeing: Top10 reports that 66% of users are returning on a weekly basis. 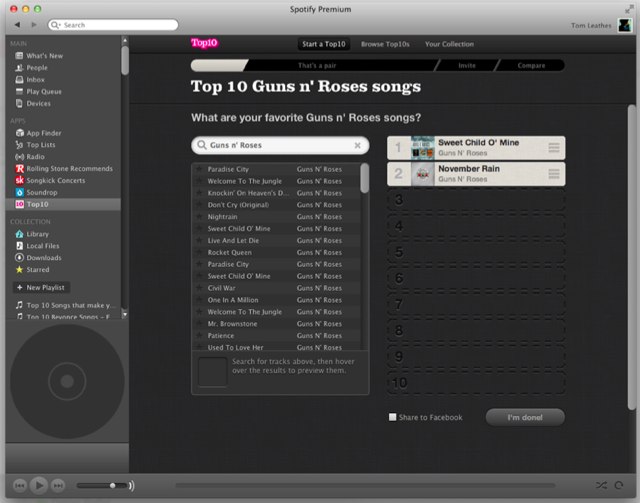