In keeping with our prediction that Google TV would be seeing something of an expansion this year at CES, LG’s first foray into the Google TV ecosystem has just been unveiled ahead of the show.

As you can see in the picture, it’s got a new interface but the guts are still Google TV. This is probably something that we’ll be seeing more of: manufacturer-specific builds, like Sense and TouchWiz for your TV. 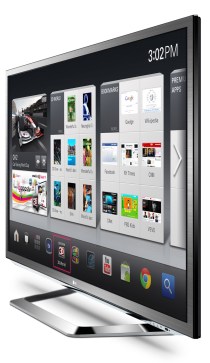 The TV itself is of an unspecified size, but chances are it will come in large and extra-large sizes (42″ and 55″ or thereabouts) when it comes out later this year. It comes with LG’s “Magic Remote Qwerty,” which is, as you might expect, a combination of its voice-controlled Magic Remote with the magic of QWERTY. Or AZERTY, depending on where you are.

I’m liking that it’s passive-glasses 3D; active glasses are a thing of the past and glasses-less isn’t quite there yet. Polarized is how you see it in the theater in general, and it’s the way to see 3D at home if you want to see 3D at all. Just stay away from its “built-in 2D to 3D conversion engine,” which sounds supremely awful.

LG is hedging its bets, though; it will also be showing its own Smart TV platform in case the Google devices flop. We’ll be sure to drop by their booth during CES to get an eyes-on with these new displays.