“I love the name of honor, more than I fear death” – Julius Caesar. Google does too, apparently. The company has lowered the PageRank of its Chrome download page after violating its own paid link policy during a sponsored blog post campaign for the browser by Google’s ad agency Unruly Media. Google’s head of webspam Matt Cutts responded to criticism of the campaign last night, saying his team “has taken manual action to demote www.google.com/chrome for at least 60 days”. Some accuse Google of lying about not knowing it was buying sponsored blog posts through Unruly. I argue it might have thought it was buying StumbleUpon Paid Discovery or other legitimate ads.

For background, earlier this week Google hired Unruly Media to drive views of a promo video for Chrome. Unruly Media paid bloggers to post the video. One blogger linked directly the the Chrome download page without using a nofollow attribute or intermediary to prevent giving link juice to the page. This violates Google’s paid link policy, for which penalties can range from a month to a year of penalized search rank.

Myself and other bloggers incorrectly assumed Google would not penalize itself. Honestly, I’m impressed with the severity of the penalty. Chrome used to rank #2 for a search for “browser”, now it’s #50. Google’s sponsored result ad for Chrome still appears atop the “browser” search, though.

It still seems questionable that Google says it didn’t expect Unruly to do a pay-per-post (PPP) sponsored blog campaign considering that’s the primary type of advertising Unruly does. Cutts says “Google was trying to buy video ads about Chrome, and these sponsored posts were an inadvertent result of that”. Google told Search Engine Land, “Google did not authorize this campaign”.

I actually don’t think Google is lying. Maybe I’m wrong, but I’d imagine Google would have made sure Unruly passed along its policies if it planned the campaign. Unruly does distribute videos through StumbleUpon Paid Discovery, Twitter, Facebook, and YouTube. Maybe that’s where Google thought it its ad dollars were going. If Google wants to put the issue to rest, it should provide a specific explanation of exactly what it thought it was buying through Unruly.

Hopefully the flack Google took for the garbage content PPP campaign will disuade reputable companies from using this kind of advertising in the future. At first I blamed bloggers for accepting PPP campaigns selling out their audiences. But really, cash flush companies bribing starving bloggers seems almost coercive. I’d love to see Unruly Media crumble right after taking a $25 million funding round today. 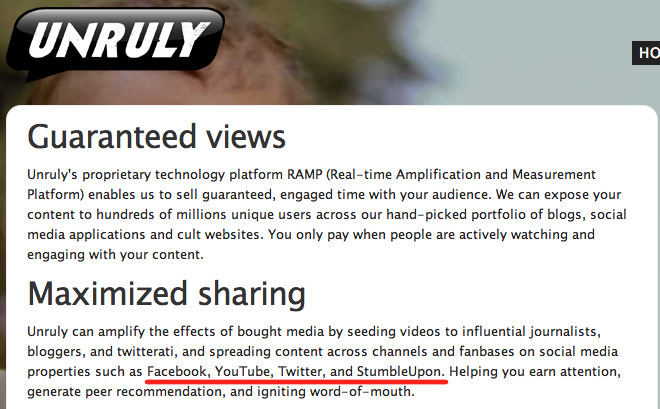