The game is on. The Iowa Caucus (important because it kicks off voting and is viewed as an indicator of which Presidential candidates have a chance at winning the Republican nomination) results started pouring in around 7pm CST tonight. So far it looks like it will be a three-way race between Ron Paul, Rick Santorum and Mitt Romney, according to analysts and preliminary polls.

President Barack Obama, who has a history of being social media savvy with his campaigning, has coincidentally used this period of intense media scrutiny to join photo-sharing darling Instagram as @BarackObama — in addition to buying promoted tweets for the search terms “Iowa Caucus.”

While President Obama and the Whitehouse have photo-sharing accounts on Flickr as well as social accounts on Google+, Foursquare, Facebook, and of course Twitter, this is the first time he’s been on a mobile-only platform. Instagram now has over 15 million users and seen more than 400 million photos uploaded. Impressive stats considering it has yet to hit Android.

Of course this doesn’t necessarily mean that Blackberry aficionado Obama will be buying an iPhone, his team will be managing the account but presumably will be letting him use their (i)phones every once in a while.

“We’ve seen political coverage on Instagram increase as the 2012 US Presidential Election nears. News organizations such as NBC News, ABC World News and the Washington Post have been sharing behind-the-scenes photos at debates and town hall meetings across the country, offering us a unique look into the 2012 elections. As we get closer to election day in 2012, we look forward to seeing how campaigns, reporters and voters use Instagram to tell the story of the 2012 Presidential Election through photos.”

And .. here is his first photo, of himself speaking to caucus attendees … It doesn’t look like he’s used a filter #nofilter and if he did it’s most probably “Jefe” or “Rise.” It’s kind of hard to tell. 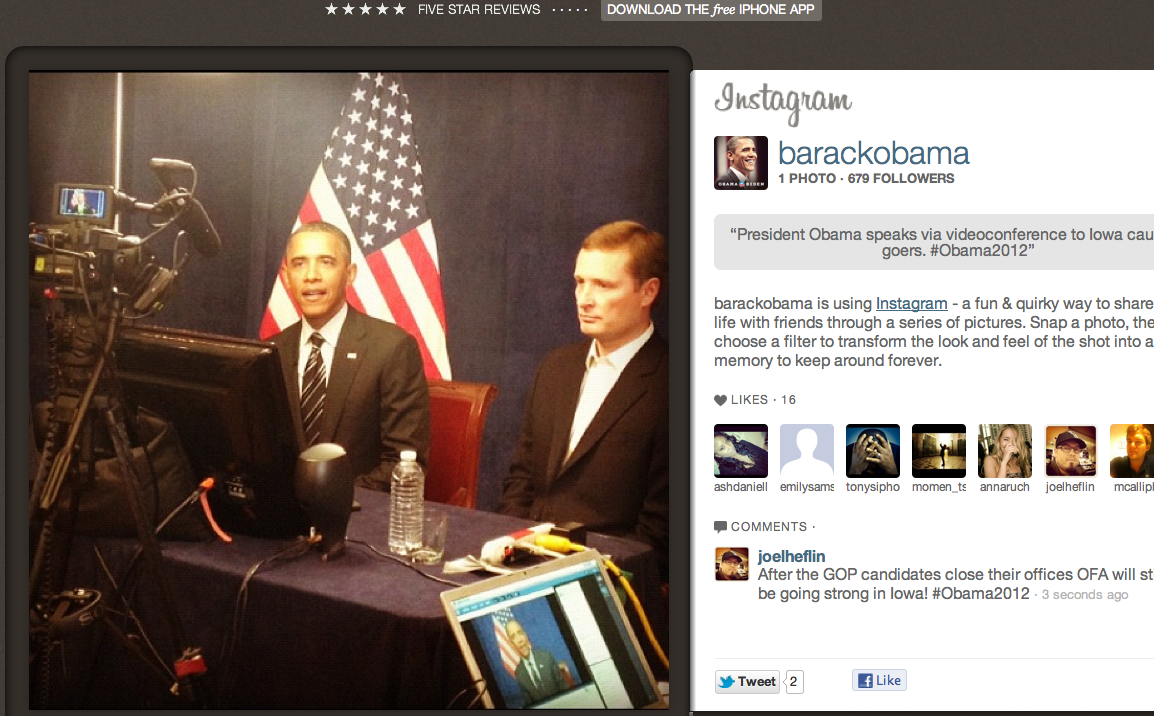