Google+ now has more than 62 million users, according to Paul Allen, Ancestry.com founder and unofficial traffic analyst for Google’s social network. That’s not 62 million active users, though — a point that everyone covering these numbers seems to have missed. It’s just the number of total users. And specifically, it’s the number of new surnames that Allen’s team has tracked being created on the service.

Because Google has aggressively integrated G+ into many other properties, including its top navigation bar and the OneBox, one would expect a certain baseline amount of sign-ups from among the hundreds of millions of people using other Google products.

The real question is how many people are returning after creating their accounts, which Allen doesn’t try to answer.

But there’s support out there for Allen’s latest numbers, from someone trying to answer the usage question. Last week, comScore told us that G+ had grown to 67 million monthly unique visitors in November, up 2 million from October. That’s significantly more than the 50 million total users that Allen reported at the end of the month.

The reason could be that the web measurement firm’s methodology includes sampling browsing habits from people who have monitoring software installed on their computers. It has been measuring traffic to plus.google.com, meaning it counts anyone who clicks through within a given month, but not G+ related traffic elsewhere. Thus, while it does show active usage, it is not measuring users, just visitors. 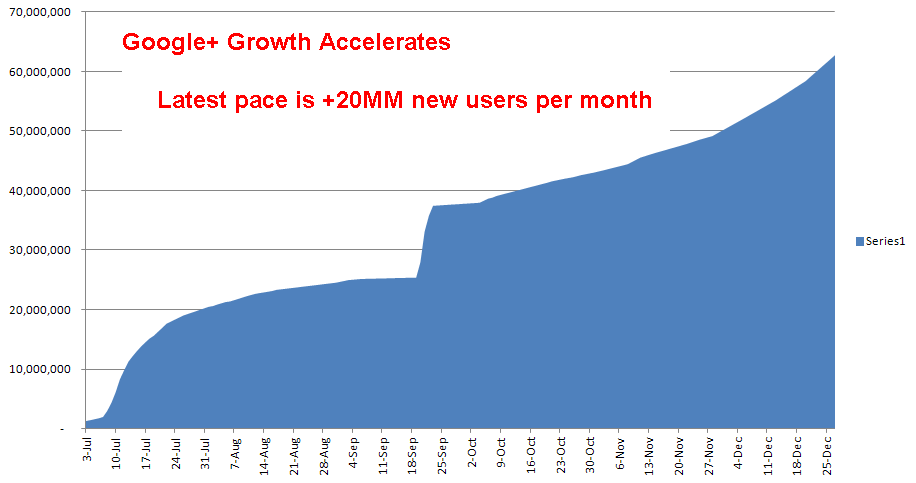 What can we take away from Allen’s new data, given the remaining question? Growth could be accelerating: more people are signing up now than in previous months, with nearly a quarter of the total user base in December alone, and around 625,000 new users per day at this point. One assumes that at least some of that acceleration is due to engagement (people using the service and inviting new friends to join, who then also start using it regularly. Coupled with comScore’s numbers and you can guess that the site is growing both in total size and engagement.

Allen’s big conclusion, based on the most recent growth increases, is that the service could reach 400 million users by the end of 2012. If that turns out to be the case, I’m sure active usage will also be increasing. But the question remains the same: how many G+ users stay active?

Next up in the G+ traffic saga: product head Bradley Horowitz has promised new numbers that are going to shock everybody. Let’s hope they includes monthly active user counts and not raw sign-up totals like the 40 million number Google previously released in September.