Kiip is not an ad network. It’s a mobile games reward network. Today it launches Swarm, a feature with a very unique value proposition: Let brands sponsor in-app tournaments where users win big prizes for high scores. Brands get exposure by piggybacking on an app’s existing user base, developers get paid, and users get to play for real-world rewards without being interrupted by ads.

Swarm’s debut is a partnership with Walt Disney Studios’ film John Carter where players of the game Mega Jump compete from December 23-26 to win a home theater system and smaller prizes. 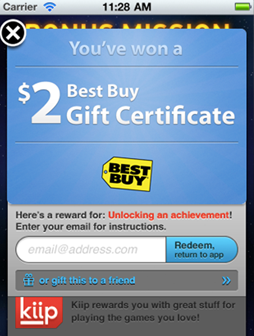 Kiip launched in April 2011 on 10 games featuring 10 brands. Swarm builds off of Kiip’s core model where brands reward playerss with small product samples like PopChips, Sephora make-up, or BestBuy gift certificates when they complete in-game achievements. Now Kiip’s network includes 65 games, and 25 brands who pay between $0.25 and $3 per engagement with their rewards.

The company is fueled by $4.1 million in Series A funding from Hummer Winblad, Dave Morin, True Ventures, and Crosslink Capital. 20-year old co-founder Brian Wong reveals to me Verizon Ventures is also an investor that was never announced. Those in early were smart. Kiip won’t need more funding soon as it’s making plenty of money, and I think it’s going to a be a major force in game monetization.

That’s because Kiip actually cares about the emotions of gamers, not just their clicks. While Kiip’s reward system can be run alongside ad networks like AdMob and iAds, it will also disrupt them. Wong explains to me that big brands are already spending a lot on ads to promote their various contests and sweepstakes. By using Kiip to distribute through games instead, they get guaranteed exposure and only pay when people actually engage.

Swarm opens Kiip up to brands in verticals such as travel, entertainment, and automotive who can’t give away a million cars or flights like PopChips gives away snacks. To protect the big prizes they’ll offer, Kiip has developed a fraud detection system to make sure high scores are attained legitimately.

Next, Kiip plans to bring its  services to games on Facebook, console, and web. The company offers a win-win-win solution by rethinking the brand marketing and mobile monetization to put users first. Wong concludes, “You can’t fall in love with an ad, but you can fall in love with a reward.”

Check out the new Kiip Spotlight to find out which games you can play to win rewards. 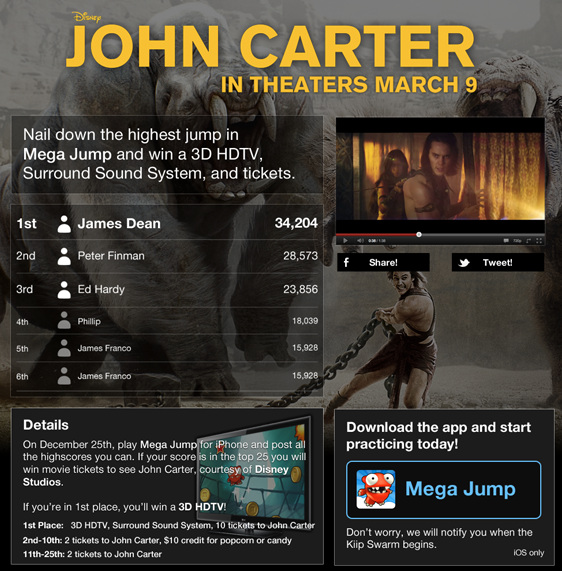