The Nest Thermostat is a gorgeous piece of eco-friendly electronics. But like your mom always said, it’s what’s inside that counts. Well then, she’ll be pleasantly pleased to find out that the inside of the Nest is as equally beautiful as the sleek exterior. The $249 thermostat might be costly, but a teardown posted on SparkFun shows the innards of a device worthy of such a price. Not only is it well-built, but the Nest is rocking serious processing power and connectivity options. Silly hyperbole alert: The Nest is a game changer.

It’s clear as you scroll through SparkFun’s pics that the Nest was designed and manufactured with an eye for detail. There doesn’t seem to be a wire or connector placed haphazardly. That’s to be expected. It’s creator, Tony Fadell, oversaw the iPod design and production during the first few years of the product’s life. 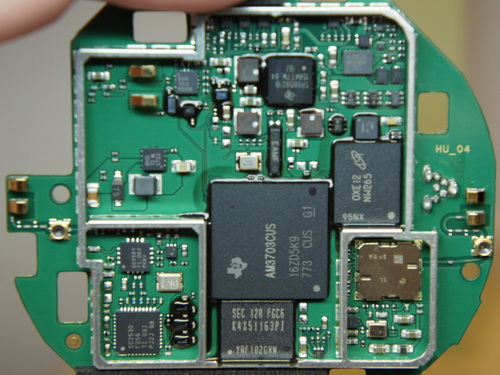 The Nest’s main PCB houses a surprising array of chips. The massive one in the center is a Sitara AM37x ARM Cortex-A8 that can run Linux, Android, and Windows Embedded CE and, thanks to a PowerVR core, OpenGL ES 2.0 is also supported. There’s also a ZigBee SoC that’s seemingly currently unused, lending to a theory that Nest has other devices in the works and will use ZigBee for wireless connectivity.

As Fadell explained to Sarah Lacy in a TCTV interview, the Nest learns from user behavior and eventually adjusts the home’s climate control based on previous activity. This requires a far amount of processing power, but the Nest has enough CPU juice to power a smartphone. The extra headroom no doubt increases the thermostat’s reliability while also allowing the company to expand on its feature set in the future.

Nest Labs quickly sold out of the first run. Another batch will hit in 2012 for the same $249 price. I’ll be the first to admit that the thermostat’s high upfront cost likely negates any savings it earns by intelligently adjusting a home’s heating and cooling system. But, and I say this with a smile on my face, I’d gladly throw money away just to hang a thermostat on my wall with enough processing power to outgun many traditional computing devices.