Omada Health, a graduate of Rock Health’s first batch of startups, is announcing today that it has raised $800K in seed funding from a number of angel and venture investors, including Esther Dyson, NEA, Aberdare, Kapor Capital, and TriplePoint Ventures to name a few.

Omada Health, simply put, has turned its focus to one of the most pervasive diseases in the country: Diabetes. Well, really, prediabetes. The CDC estimates that 79 million people in the U.S. currently have prediabetes — said another way, that’s approximately 1 in 3 adults. And the majority of those people are not aware of their condition, which essentially means that they are suffering from blood glucose levels that are not irregular enough to be considered diabetes, yet still indicate an extremely high risk of progressing to full-blown diabetes.

And the projection is pretty grim. If nothing is done, the CDC estimates that half of the American population could have diabetes or prediabetes by 2020. Besides bringing attention to the ways that food is being produced, distributed, and consumed, Omada Health Co-founder Sean Duffy tells us that lifestyle programs have been (and are being) designed which can dramatically reduce a person’s risk of progressing from prediabetes to diabetes. The Diabetes Prevention Program, for example, was a recent, major multicenter clinical research study that developed a 16-week lifestyle program that succeeded in reducing progression by 58 percent.

Omada Health, then, is leveraging these types of research and programs to bring interventions to the millions of people with prediabetes through group-based programs, “human-centered design, behavioral science”, and web technology. Duffy tells me that the startup aims to be (one of the first) online platforms for delivering preventative care at scale — at a cost point that demonstrates compelling ROI for insurance providers or self-insured employers.

The Omada program matches people with prediabetes into small groups, pairing each group with a “facilitator” trained in the Omada curriculum, who then guides patients through a 16-week lifestyle course. While progressing through the course, Omada tracks their progress using a cellular-connected scale as well as other metrics. So far, the startup has run two prototypes and is currently preparing for a larger pilot early in 2012.

The startup was first conceived as an internal project at the global design consulting firm, IDEO, where Duffy and co-founder Adrian James were both employed. In May, the two left IDEO to join Rock Health, were later joined by two more staffers, and today the team has added a round of seed funding to push forward with their pilot program and ramp up hiring.

We’re looking forward to hearing more about the pilot program, so stay tuned. For more, check out Omada Health at home here. 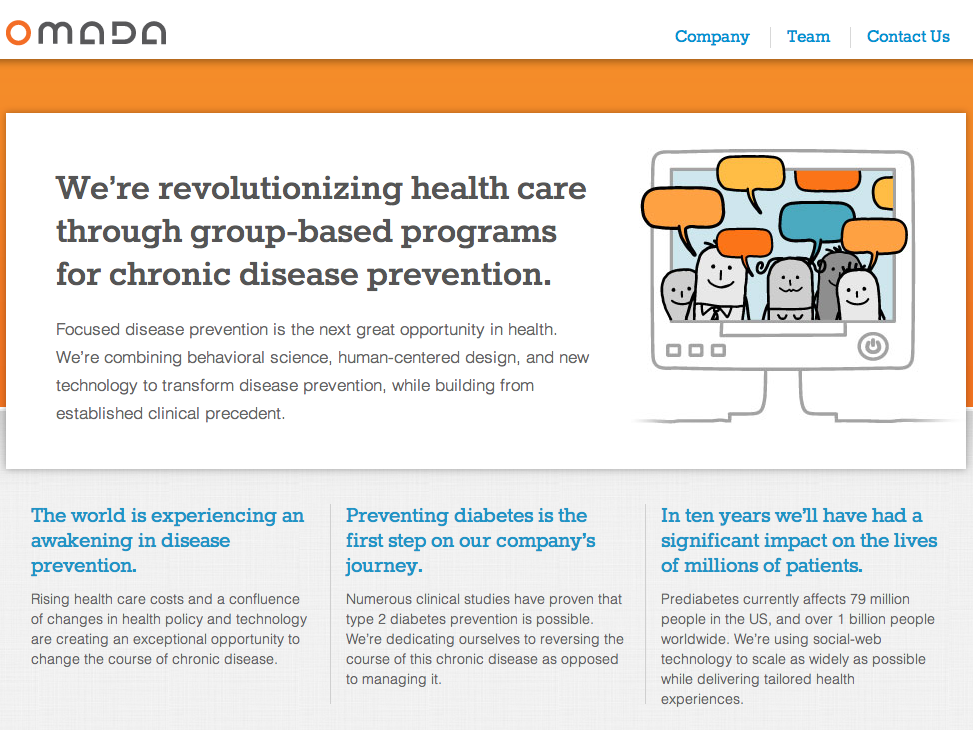