Both Netflix’s brand and shares have been battered this year after price hikes last summer and the botched attempt to spin off the DVD rental business. Netflix was roundly criticized for its miscommunication with customers, but what’s been the actual effect? Citi analysts Mark Mahaney surveyed almost 10,000 former and current Netflix customers to find out.

Netflix is essentially holding its own. What’s more, it actually increased its lead over Hulu among respondents. Asked which websites they use to watch movies or TV shows online, 27 percent said Netflix, versus 15 percent for Hulu. Back in May, both sites were neck-and-neck with 20 percent for Netflix, and 19 percent for Hulu). These numbers support Netflix’s own reports that streaming is growing and that Netflix is increasing its lead against Hulu—at least among Netflix customers. (Amazon also gained ground with 9 percent market share, up from 6 percent in May).

Also, despite all the sturm und drang surrounding the pricing changes last summer, more than half of Netflix subscribers (54 percent) made no changes to their plans as a result. Another 28 percent cancelled their DVD portion, and kept streaming, which is what Netflix wanted them to do. So nearly a third of customers switched in a fairly short period. Only 8 percent cancelled streaming and stick with DVDs. 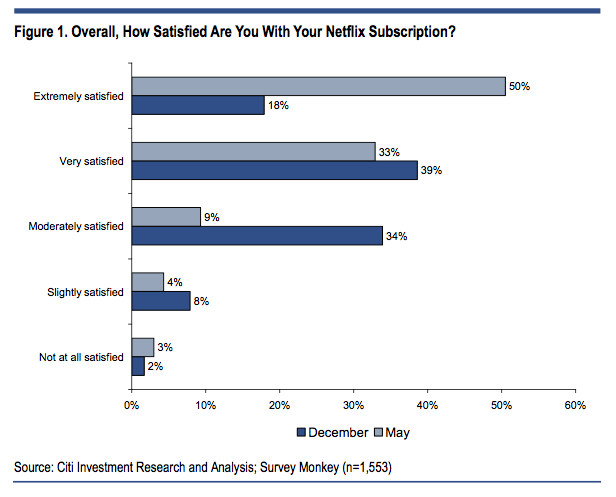