Dave Morin and Path’s secondary standalone app With “is winding down”, according to a tweet, email, and blog post from Path. “Now tweet who you’re with directly from Path”, the email explains. The encouraged migration signals the end of Path’s experiment with a stripped down, single feature experience.

Update: A tweet from With confirms that it will cease to function at some point today.

Path’s blog posts says “After a long and friendly coexistence, two apps have become one. And the pair has settled on a name: Path 2.” With’s end just 6 months after its launch resurfaces the standalone vs comprehensive app debate. Companies have to decide whether their apps should provide many functions but bury them in menus, or offer rapid access to one function.

Path recently released its more comprehensive 2.0 update, which has led to 30x growth of the app’s user base. Rather than force users to waste home screen space and choose what they want to do first, Path 2.0 simply integrates With’s functionality. In addition to tagging who you’re “with”, you can share your sleeping habits, music, and now standard content like photos and location.

Morin’s former employer Facebook is moving in the opposite direction. This summer it released its standalone Messenger app based off of its acquisition Beluga, and we hear it’s still working on its standalone mobile photos app that leaked in June. I see this as a slippery slope where instead of bloat you get a fractured experience.

I like comprehensive apps that let me bounce from once use case to another without having to exit to the homescreen, so I’m happy to see With go. Often times the functions split between apps are highly related, and saving one extra click through a menu doesn’t seem to warrant downloading and updating an extra app. The With sunset will also keep Path’s team focused on building a distinct experience from Facebook and Twitter where you share a lot but to only your closest friends. 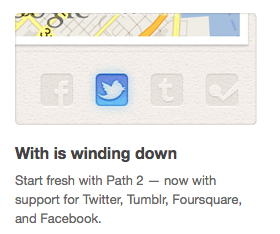