The age of driverless cars may still be years in the future, but to those playing a long game, that just means that work now will pay off even more later. Google is getting into the business of tracking and managing driverless cars, and while the technology actually steering and perceiving the cars’ surroundings will be undergoing lots of changes, some fundamentals of their interactions with the world can actually be explored today.

For example, Google has been granted a patent for a “landing strip”: a parking spot with special markings that help the car park itself, and then allow it to determine exactly where it is without relying on GPS or landmarks. 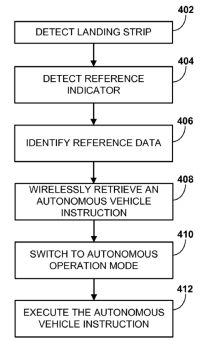 A smart parking spot has an air of inevitability to it that suggests it is one of those ideas that last. The patent is fairly specific, though: a visually-indicated landing strip, which in the illustrations is a banded area, would be stopped on by the driver. The car would detect that it had stopped on a landing strip, and would know to search the area for a second indicator, in this case a QR code.

The QR code would direct the car to visit a URL and, presumably, report itself as at location #382B319_g and awaiting instructions. The server would tell the car its exact location down to the inch, and any additional info the car might need: the locations of available parking spaces if the landing strip is at an airport, for instance, or local maps, navigational data, or rules. It could also push other information from local sources: live cameras, information about the location, and so on.

The title of the patent, “Transitioning a mixed-mode vehicle to autonomous mode” refers to this point in the process, after the person has parked or perhaps just driven over the landing strip, at which time the car would switch over to autonomous navigation.

It’s a neat process and there’s no conflict between the driver and the car. On the highway, for instance, things will be much more complicated: the humans will be watching that the car makes no mistakes and will be ready to grab the steering wheel if there’s an error. On the other hand, the car will be watching the human for mistakes, and will hit the brakes or warn the driver if there is danger. The landing strip is a more clear-cut handover.