Republic Wireless, the potentially disruptive mobile phone carrier that uses special hybrid Wifi/cellular phones, has another plan to help spur interest and drastically reduce your phone costs. We’ve confirmed with the company that starting this week, it’s going to let its users to receive international calls to any phone, free of charge. Well, that’s their aim anyway — read on for the details.

For those that missed our initial coverage, Republic Wireless is a subsidiary of Bandwidth.com — a company that gets relatively little attention in the mainstream press, but whose sprawling Internet infrastructure is responsible for powering portions of many of the most popular VoIP services, including Google Voice, Skype, Twilio, and others.

Republic Wireless taps into Bandwidth’s infrastructure to offer a phone carrier that’s a WiFi/cellular hybrid. After signing up (they’re currently in a limited private beta), Republic sells you a special Android phone that automatically connect to your Wifi networks whenever possible and routes your call via VoIP (which is far less expensive for them than traditional carrier minutes).

If your phone can’t find any Wifi networks to connect to, it switches over to Sprint’s mobile network. And because much of your usage will be routed over Wifi rather than a cellular connection, Republic can offer its service at a rate that’s much cheaper than the likes of Verizon or AT&T: it’s only $19 a month. There are a few caveats to that, though — namely, that you can’t use too many cellular minutes (you can find more details in our previous coverage).

Which brings us back to this week’s launch, which will allow Republic members to receive international calls for free. To do this, Bandwidth.com has managed to acquire its own country code (as was noticed by DSL Reports), which it will be assigning to Republic Wireless.

Republic has confirmed that free international calling is indeed what the country code is for, and that it will work similarly to the way other international calls work, just without the fees. If you initiate an international call from your phone over Wifi, it’ll be free of charge, no matter who in the world you call (Update: Republic has clarified that if a country has its own country fees, those would still apply). And when your friends abroad want to call you, they just type in Republic’s ‘country’ code, 883-5110, followed by your phone number, and that incoming call will be free to both parties as well. Pretty simple, right?

Thing is, they’re not quite there yet — that’s how easy it will be, provided Republic Wireless can get other carriers to come on board. And this is where things might be a bit tricky.

In order for these country codes to work, they have to be recognized by the various carriers around the world. If, for example, one of your friends lives in the UK and is on Orange, and they call your Republic Wireless number, that call will only be free if Orange has opted into supporting Republic’s international code. And there’s no rule mandating these international carriers to sign on board. But there are ways to encourage it — get enough people to ask for it, and the carriers may well add Republic support.

To help get the ball rolling, Republic Wireless has managed to land some notable support at launch. Namely, Google, who is integrating the Republic international code into Gmail’s phone feature. And Republic Wireless says additional partners will be coming soon. In the mean time, they’ve also launched this site where carriers can sign up to support Republic’s International Country Code.

To sum things up,  at this point Republic’s free international calling isn’t going to be especially useful — your inbound international calls probably won’t be free. But that will change as it (hopefully) announces that traditional carriers have started to come onboard. I’m looking at this as a very ambitious and potentially awesome experiment (which could be said of the company in general, actually).

Because if this works out, to the point that it becomes the norm for carriers around the world to support Republic Wireless’s international code, it could really change the whole game as far as international calling is concerned. Free calls, to any phone, has a really nice ring to it.

Update: You can be “one of the first hundred million” to reserve your 8-digit international number here. 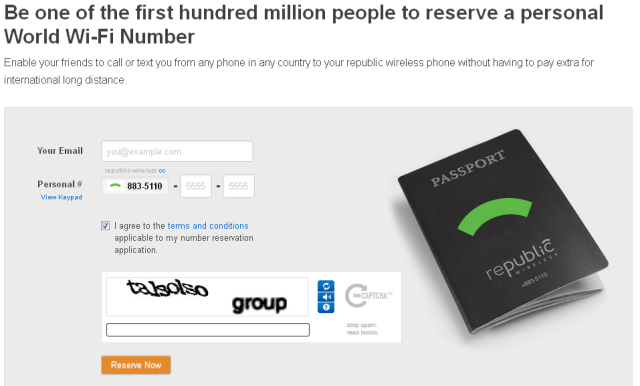