Urbanspoon, the mobile restaurant recommendations and reservations application, is today adding a new feature called “Dineline,” which allows users to check-in to restaurants in order to track their dining habits. While most check-in apps are meant to register your presence at a venue for the purpose of game play, social networking, or receiving offers or discounts, Dineline is meant to be used to remember a meal, something more akin to Foodspotting than Foursquare.

The feature, rolling out to iOS users this morning via an app update, adds a new icon to the Urbanspoon homescreen. For those of you who haven’t been on Urbanspoon for a while, it’s no longer just a clever slot machine-style toy to find new places to eat. It also lets you browse and search for restaurants, connect with friends, and snap and share photos of the restaurant or your meal. It’s this latter feature – the photo-sharing aspect to the service – that is most improved with the addition of Dineline, as it now gives that photo a more personal context and purpose. 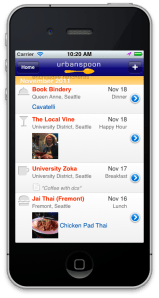 When you launch Urbanspoon now, a check-in button appears on the top right of the homescreen, allowing you to enter the “Where” and “When” of your latest meal. If you choose to share more information, you’re able to add a photo, meal price, notes and tap “I like it” or “I don’t” to save your quick opinion.

From then on, that check-in and the additional information you added will be available in the Dineline section of the app for future reference. The app will even make you charts and graphs about your favorite cuisines, restaurants, neighborhoods and more.

One nice thing about the check-in feature is that all this info can be added after the fact – which is great for those of you who don’t want to be the nerd at the table taking notes about your food. Just steal a quick photo and you can do the rest later. This is also handy for the security-conscious, who don’t want to broadcast where they are when not at home.

Despite being called a “check-in,” the addition is clearly not mean to pit Urbanspoon against Foursquare or Facebook, as it’s more of a utility than a social feature. That makes a bit more sense than Yelp’s check-in, for example, which blatantly rips off Foursquare’s idea of “Mayors” for its “Dukes.” However, at least Yelp’s check-in lets you push your arrival out to Facebook and Twitter, but Urbanspoon is Twitter-only. That needs to change. (Seriously, the whole Twitter is about “tweeting what you had for lunch” thing is a myth. Most don’t).

The Urbanspoon mobile apps have been downloaded over 20 million times across mobile platforms. The app update should roll out shortly on iOS.