Google has just launched its much-rumored Flipboard competitor, Google Currents. The service is available for both iOS and Android — including support for phones and tablets — and you can download it right here. But only if you’re in the US (sorry international readers).

The gist of Currents is simple: it’s a clean, touch-friendly way to consume your favorite blogs and news sites on your phone and/or tablet. And it looks good — much better, in fact, than most of Google’s other applications.

After installing the app, you’ll see icons for a handful of pre-selected publications like 500px and The Daily Beast. Currents will immediately begin downloading the most recent articles from these sources, and you’ll also be prompted to add additional publications to your Library (including TechCrunch, should that suit your fancy — we’re an initial launch partner).

If you’re using a large enough display (in other words, a tablet), Currents will display large photo banners that help lend a magazine vibe to the app. Aside from these, the app is broken into two main sections of content: Library and Trending. The former is where content from the publications you’ve opted to follow will show up , and the app will proactively download that content so you can read it offline.

The Trending tab displays the hottest stories across the web, broken down by category and drawn from a variety of sources. The default section is called simply ‘Top Stories’, and you can add additional topic-specific lists including Technology, Business, and World News.

But while Currents has been discussed as a Flipboard competitor — and it is, in the sense that it gives you an attractive way to browse your favorite sites — this initial release has relatively little integration with social networks like Twitter and Facebook, which are Flipboard’s bread and butter. At this point Currents will let you share with any social apps you have installed (as you can with most Android apps). But you can’t connect with Twitter or Facebook to view posts shared by your friends within Currents itself. Another way to put it: at this point, it doesn’t feel terribly social.

That said, Google says it plans to roll out more social features down the line, so this may come eventually. Of course, the fact that Google omitted them from this release may indicate that it’s more interested in driving people to Google+.

Here are some of my other early impressions (I’ll be adding more as I spend more time with Currents): 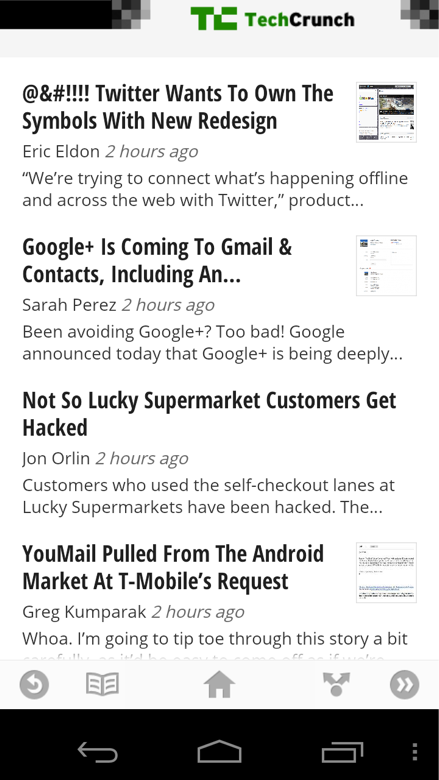