It’s been a busy year for Google — in more ways than one. Larry Page took over the reins from Eric Schmidt as CEO; there have been a steady stream of products hitting the deadpool (see the first graf here for some examples), while on the flip side, we’ve seen the arrival of Google+, Google Music, Google Wallet, and the purchase of Motorola — just to name few.

We’ve heard a lot about the success of Android, too, as well as Google’s ongoing redesign of its products: Search, Maps, Reader, Gmail — each are getting a new coat of paint. Android.com got a new look in November, YouTube launched “the biggest redesign in its history” yesterday with serious G+ integration, and on and on.

For all the coverage of smartphone proliferation, Android, search, G+, and so on, we haven’t heard as much about Google’s fledgling web apps market. We’re quietly sneaking up on the first birthday of the Chrome Web App Store. Google’s browser itself has been quickly gaining ground amongst the competition, as Robin reported last week that Chrome had passed Firefox to become the second largest browser in marketshare, with 25.7 percent. Based on those numbers, both Firefox and IE (which has the top share) have been in seemingly aggressive declines, while Chrome has been growing steadily.

As to Chrome’s app store, the early reports showed slow growth and sales, but in September the Web Store passed 30 million aggregate users. Then came the redesign.

In October, Google brought its wide-ranging redesign to its browser’s web app store, completely overhauling the store’s look and its user experience. In contrast to its launch, the web app store’s remake seemed to catalyze a big increase in traffic, across downloads, users, and total number of apps, with The Independent reporting that the web store’s apps have now hit ‘millions of downloads a day’. 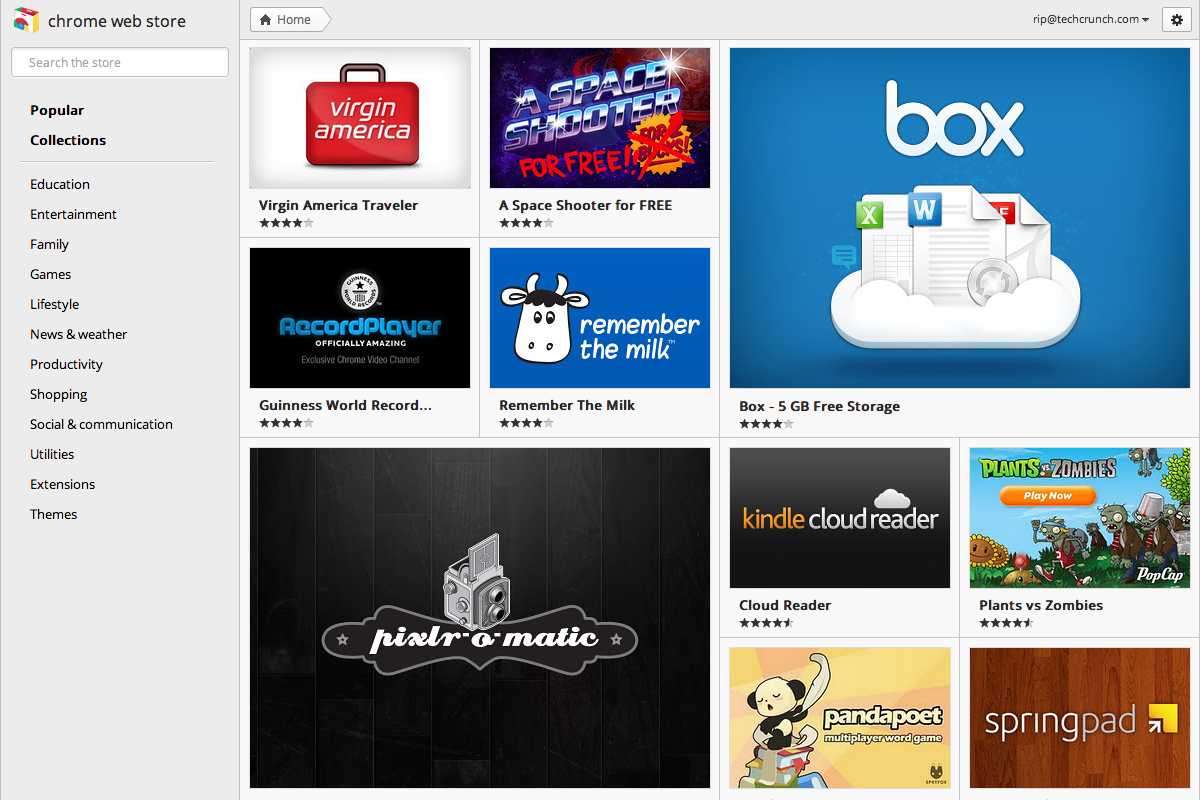 Chris Sorensen, Founder of ChromeOSApps.org, an independent website that monitors CWS app performance, shared some interesting numbers with us: In the month prior to redesign, the Chrome Web Store saw an average of 33 million app users, and the month after redesign CWS is now seeing 55 millon users. Downloads per day prior to redesign were about 525K, compared to the month after, when they’d jumped to 1.2 million, and the monthly growth of users prior was 20 percent, compared to 63 percent after.

Taking a look at these numbers, one would think that Google’s redesign has, in just over a month, already had significant impact. Not exactly “millions per day”, but it has.

But how? What’s important to remember is that, during the month surrounding the web store’s redesign, Google synchronized its downloaded apps across its platforms. What counted as one app download (when the app store launched, for example), now may count as multiple downloads as the store began synching apps across browsers on users’ desktops, laptops, and devices.

As such, Sorensen tells me that he thinks the Web Store’s download numbers (and user numbers) are likely inflated. This isn’t a deliberate move on Google’s part to mislead, the truth is that they’re learning on the fly.

What’s more, before its redesign, Chrome Web Store was showing just over 6,000 apps total. Since redesign, we’ve seen the total number of apps jump to over 18K — a threefold increase in about six weeks. It his a dramatic sign that all of a sudden developers have fallen in love with Chrome’s Web App Store? Not exactly.

Certainly, the new app store has significant new potential for app developers, but this increase is due to the fact that the old Chrome Web Store had an inherent limit to the number of apps that could be displayed in each category, like 50 pages of 20 apps, for example. So, for the “Games” category, there were 1,000 apps that could be accessed and downloaded, but there was no page 51, that was it.

So, now that the ceiling has been lifted, the full bevy of apps is now appearing in the store, and it’s likely that many of these apps were already there, they just hadn’t made the cut. Whether that was because of a lower quality of apps, fewer downloads — that remains to be seen. Google hasn’t yet shared.

Thus, while the drastic increase in downloads, number of users, and total apps in the store — over a fairly short period of time — has been inflated by the processes involved in restructuring the store itself, the redesign is still having a very real effect on the success of its apps.

The new layout has brought a new image-centric look to the store, with each app getting a title, showing its rating in number of stars, and an accompanying image. When you scroll over the app, a brief description pops up, with the ability to one-click download from there. If you click on the app, you remain in the store at the same expanded URL, but now see a full-screen box with three tabs within, where you can view images, details, reviews, etc. All in all, the new design looks great; it’s a big step up — it now looks as if Google’s actually taking CWS somewhat seriously.

Furthermore, some apps receive larger images within the storefront, and Google has not yet shared exactly how it’s deciding on placement, which apps get larger images, front page real estate, and so on. Some apps with 20K users are still at the bottom with apps that have under 50 users. But the real point of interest for developers is that apps, whether they’re now on the equivalent of “page 1” or “page 20” (there are no pages anymore, it’s just one long stream), all apps are rising on a rising tide.

Without having to click through pages, some of the friction has been removed. And while apps close to the top are still benefitting from a higher volume as one would expect, the growth is happening across the board. Below you can see a sample from the “Education” category, for “page 1” and “page 20”. 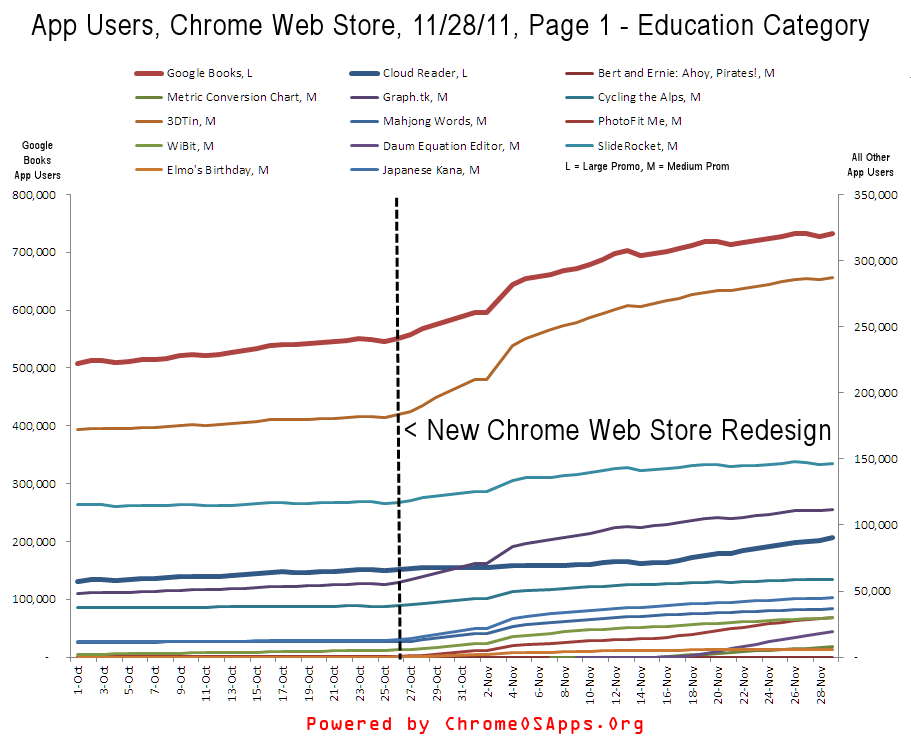 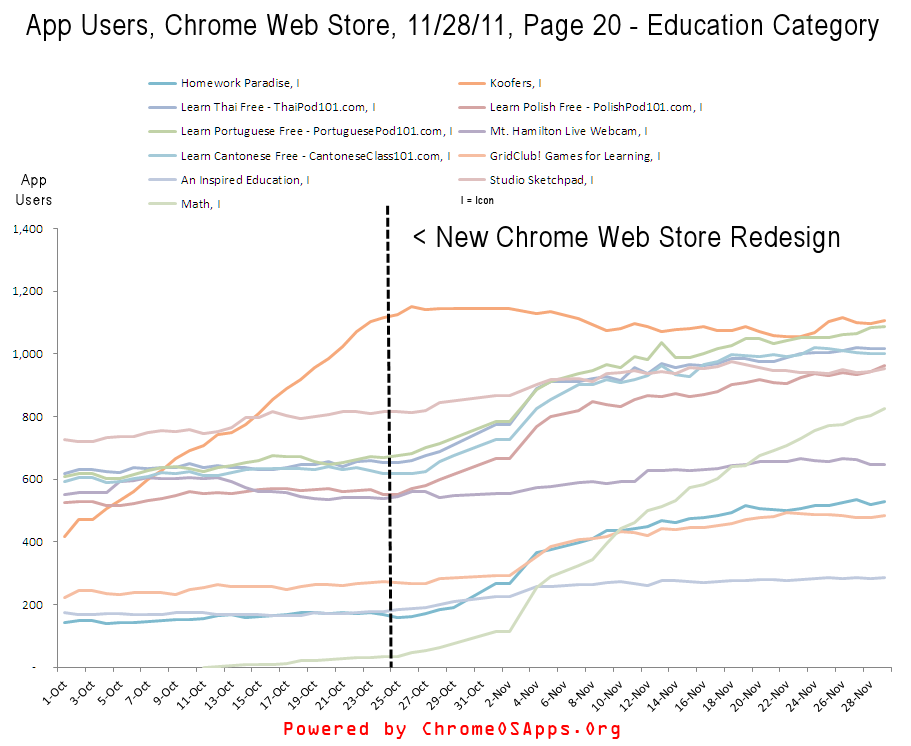 Of course, not everyone wins, but at present, some app developers are happily surprised to find that their apps are being placed on the front page — with large promo images to boot. Sorensen cited the example of a game called Little Alchemy, designed by a young developer from Poland. Receiving a large image on the front page, without prior warning, the app’s user base shot up from 186K to 342K — with no other promotion. Inflated or not, that’s a good sign.

As Chrome’s share of the browser market continues to rise, there’s no doubt that its web store will benefit. And with less of an atrocious user experience, there is bound to be less friction and, with it, more downloads, users, and (gasp) maybe even more paying users. If the number of apps continues to grow at or near 60 percent every month, the key for developers, then, will be how to optimize placement within the app store’s ranks. There is currently a “Popular” tab, but no breakdown of these popular apps into categories — no top ten lists, a la iTunes. So, the number of ways for an app to be discovered remain small.

Sorensen said he’s currently developing an app to track placement in the Chrome Web Store, what categories the app appears in, its rank, image size, etc., which should give developers a better sense of how their apps perform as they move. Will be interesting to see, too, how much control there is over placement within the store.

Side note: CWS turns one officially on Wednesday.

What do you think? Tongue planted in cheek: Any chance app placement optimization rivals SEO in the next year?

Update: Google added a few new features to CWS this week, including a number of sorting filters which are designed to make it easier for users to find what they’re looking for, like “most popular” and “highest-rated”. (These are available in both category and homepage views.) Google also added a “Related” tab next to apps to let users more easily find similar apps and extensions. More in Google’s blog post here.