Color is almost ready for round two.

The company — which famously raised $41 million and launched last spring only to watch its initial product bomb (which in turn spurred plenty of Schadenfreude) — has spent the last eight months trying to figure out what went wrong, and where it’s headed next. And now it’s back with a product that has a mission statement as simple as its original vision was complex: it wants to reinvent the status update, in the form of 30 second long, muted video clips. Actually, Color says it isn’t really thinking of these updates as video at all, but rather as “visual” status updates that fall somewhere between videos and photos.

The last time we heard from Color was back in September, when it announced that it was going all-in on Facebook’s platform (the original version of the product tried to build a new, elastic social graph). The app they previewed in September combined aspects of live video-streaming service Qik with Facebook’s Photos product. And over the last few months Color has been running a private beta program at Texas A&M, where they’ve been monitoring the various use cases students come up with. They’ve tweaked the product significantly as a result of that testing, and they’ll be shipping the new Color to users on both iPhone and Android in the next few weeks.

So what does the future of Color look like?

The new app, which I received this morning and have played with briefly, is similar to the early build we saw in September. Its basic functionality includes a feed of the photos your friends have recently posted to Facebook, as well as a visual Timeline view that lets you browse the photos you’ve recently uploaded as well. But the big differentiator is the concept of the ‘Visit’, which lets you capture a brief, 30 second movie clip that Color hopes will serve as the next generation of the status update.

The original version of the Visit was actually a live video feed that could stream indefinitely — not just a 30 second clip. But Color CEO Bill Nguyen says that during the beta period at Texas A&M, students complained that these videos were too high-pressure. So Color restricted them to thirty seconds in length, and they also removed the audio. Nguyen explains that muted videos are much less stressful to record, as you don’t have to worry about what your friends are talking about, or any background noise.

When you record a Visit, any of your friends who also have the Color app installed get a push notification (you can tone down these notifications if you’d like). Your Visit also gets posted to Facebook, where friends can watch it without having to install anything. And they can watch the recording in their News Feed or your Timeline any time (in other words, they don’t have to watch it live).

In an interesting twist, Color has decided that anyone who posts a video should be able to see who watched that video — in other words, if one of my Facebook friends watches something I post, I’ll know it (this only happens if they have the Color app authenticated on Facebook — if they’ve never used Color, it won’t show that they watched it). This is different from the way most photo/video sharing apps work, and while I think it could be fun, Color should do a better job explaining how it works so as to avoid potentially awkward surprises.

At this point the app still has some quirks around sharing, largely because Facebook hasn’t rolled out components to its Open Graph API. But the company says they’ll be fixed in the coming weeks. And Color says additional features will launch alongside the Open Graph as well.

I’m going to reserve judgement on the video-as-a-status-update idea until I’ve used the app more, but it isn’t a new concept. You may remember 12seconds.tv, an app with a similar premise that prompted users to share 12 second video status updates via Twitter. The company folded a year ago. But Color has a few tricks up its sleeve that 12seconds didn’t — namely, a new set of Facebook APIs, as well as a heavy emphasis on shooting these short video snippets with mobile devices.  I’ll have more thoughts on the app once it officially launches.

One other thing to note: Color’s private beta was initially supposed to be run at Harvard. Nguyen says that the company decided to move it to Texas in part because they found many Harvard students are on BlackBerries, and because Texas A&M is “one of the top universities for use of social networking”. I suspect that they may have also faced more skepticism at the birthplace of Facebook than they did at Texas, and that the app didn’t get much initial uptake at Harvard.

After clicking on the thumbnail, the 30 second video opens 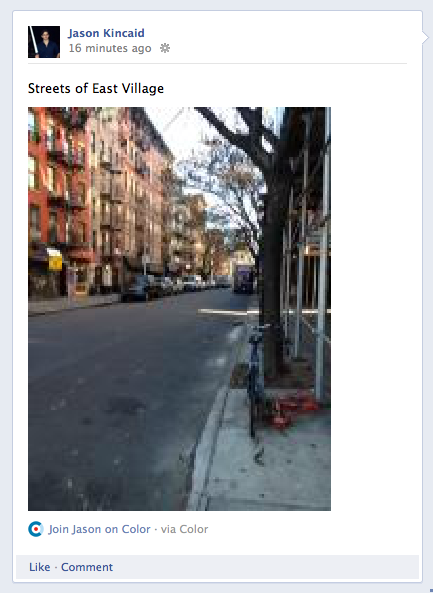