Academia.edu, a social network for researchers, is having a good year. In 2011 it’s tripled its total registered userbase to 800,000, and today it’s announcing some major news that ensures the site will be expanding well into the future: it’s just raised $4.5 million in a funding round led by Spark Capital, with participation from True Ventures. This is the company’s second round of funding, after a $2.2 million round in late 2009 (the investors from that round participated in this one as well).

Academia.edu can be thought of as a social network for academics, in that it allows them to forge connections and follow updates around their field, but it has another benefit: it gives them a powerful, efficient way to distribute their research. Unlike, say, a personal website, which probably won’t have much in the way of analytics or search engine optimization, Academia.edu will let researchers keep tabs on how many people are reading their articles with specialized analytics tools, and it also does very well in Google search results. Academics are uploading 2,500 articles to the site each day, and, as a result, the site is now drawing some 3 million unique visitors, many of whom are arriving at the site’s articles via Google.

Founder Richard Price (whose Academia profile you can check out here) says that aside from getting an increasing amount of traction with researchers, the site is also benefitting from a recent movement among universities and researchers that’s referred to as ‘Open Science‘. If you’ve ever tried looking up scholarly papers online, you’ve likely encountered one of the many paywalls put up by the journals those papers were published in. Access to these papers can be very expensive, depending on the journal — in some cases prohibitively so. In short, the information is fragmented and doesn’t flow freely.

Recently some scientists have begun to combat this by deeming their papers ‘open access’, thereby making them publicly accessible for free. Princeton now requires researchers to get a waiver if they want to assign all copyright to a journal; MIT and Harvard have both enacted open access policies as well. Many researchers believe that this open access will help streamline the research itself, allowing for faster innovation.

Academia.edu benefits from this movement because it means that researchers are free to share papers amongst themselves on the site. Price says that Academia.edu is already the largest platform for sharing these research articles, and the company looks to help foster this trend going forward. 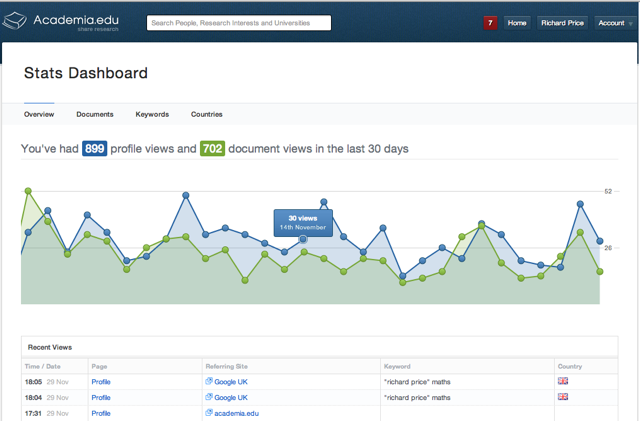