Facebook launched a new set of social channels for apps to reach mobile users last month, that includes notifications, search, news feed stories and bookmarks in its mobile web and iPhone apps. We haven’t heard too much about the results from developers so far.

But here’s a little bit of interesting new data from Snap Interactive, a publicly-traded company that has a popular cross-platform app called Are You Interested. After Facebook rolled out the new features in mid-October, the company said its mobile traffic to that app got a significant boost (although it’s not providing specific numbers).

The number of average daily logins on its AreYouInterested iPhone app (here) increased by 70 percent between the 30 days before the October 10th Facebook integration and the 30 days after.

That resulted in the app rising from the #10 to #5 position in the iTunes App Store top grossing social networking apps chart. Yes, the category is not particularly large, but dating apps like Snap’s can monetize quite well by charging users for things like sending flirty messages to objects of their affections.

Take a look at the directionally interesting graph, below, provided by the company: 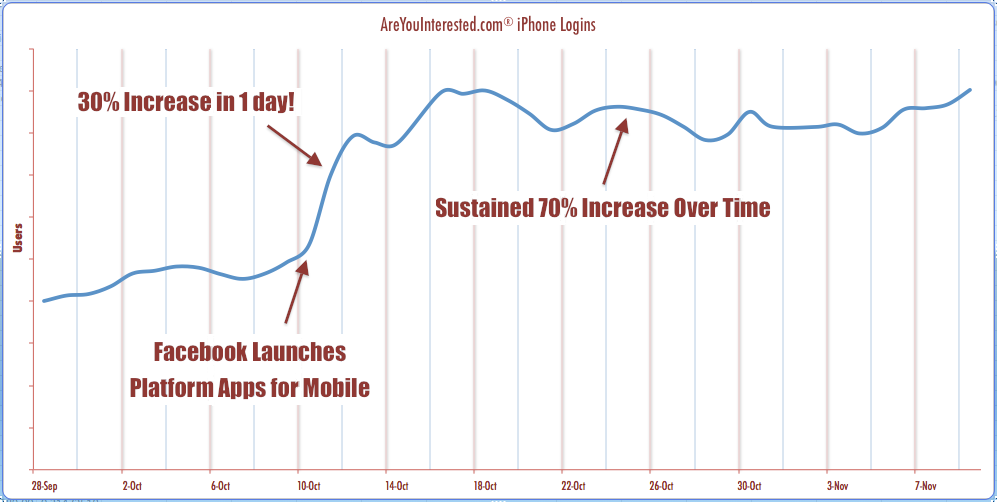 Beyond iOS, Snap tells me that its traffic on its mobile web app have gone up 50%. Mobile now makes up 10% of its total revenues.

Overall, Are You Interested has 7.3 million monthly active users and 610,000 daily active users on Facebook, according to Inside Network’s AppData app tracking service. These numbers include any mobile traffic that’s based on users’ Facebook accounts, but not traffic from outside of Facebook. Also, note that the app’s MAU has been going up lately, while DAU appears to have seen a bit of a decline — apparently in spite of the mobile integration.

You can find more details on Snap’s company blog, here.