Microsoft might have missed the tablet party bus. At least that’s what a Forrest report published on Tuesday states. Consumers have lost interest in a Windows touch device even though just earlier this year the majority of those polled wanted such a device. But now, likely after the barrage of different tablets released this year, that number has waned as expectations changed. Where a tablet was once thought to replace laptops, now it’s mostly seen as an entertainment device. Recent low-cost tabs such as the Fire and Nook Tablet further define a tablet as a low-cost device.

A Microsoft tablet is on the horizon. That’s a fact. The company demoed a Samsung device at its BUILD conference earlier this year, but the next-gen platform isn’t slated for release until late next year. As Forrester notes, current tablet leaders will already be on their third generation tablets by the time the first Windows 8 slate hits. As time progresses, consumer interest in a Windows tab is rapidly slipping. 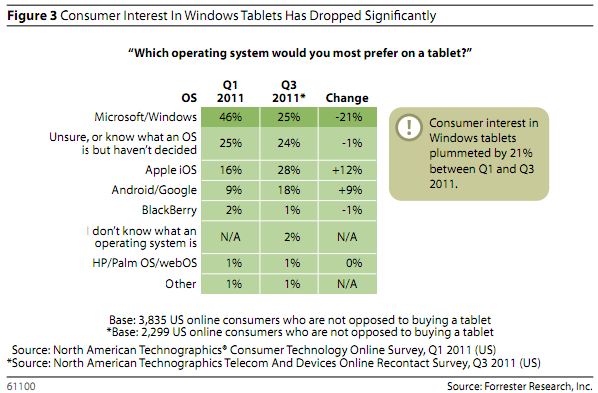 The numbers are somewhat shocking, but at the same time understandable. In Q1 2011, 46% of potential tablet shoppers wanted a Windows tablet, but in Q3, that number dropped to just 25%. During the same time period, Android’s appeal gained some ground going from 9% in Q1 to 18% in Q3, although it still trails Windows despite the huge number of available Android devices. iOS and the iPad gained the most, though. Now, in Q3 2011, 28% of potential buyers are interested in an iOS device rather than 16% in Q1.

There is some good news as the Forrest report points to OEMs jumping on Windows 8. Both Samsung and Dell have already committed to support Windows 8. Forrest expect most OEMS to join the Windows 8 team partly because Android tablets have yet to mature into a cash crop. High prices, poor marketing, and fragmented product offers are cited as reasons. But with Windows 8, companies can “leverage their investments in Windows 8 laptops and desktops.” Companies are already working on Windows 8 desktops and laptops. Offering a Windows 8 tablet is a smart, scalable option.

Besides mind share, Microsoft has several obstacles to best in regards to a Windows 8 tablet. Forrest notes that Windows must differentiate itself in productivity and gaming by leveraging touch/voice-first control schemes and the successful Xbox platform respectively. Also, the Windows 8 tablet must be priced well as Forrest found the optimal price point to be $308 (that was before the $199 Kindle Fire). Moreover, consumers need to be reminded of Windows 8 through a smart marketing campaign and Microsoft needs to invest in new and old distribution channels.

While it’s never too late to launch a good product, Microsoft is quickly losing market share it never had. A year ago, per this report, Windows was the tablet OS of choice for potential buyers even though such a device wasn’t available. But now, Android and iOS are quickly eroding consumer’s interest in Microsoft’s offering. At this rate of decent, Windows 8 is going to have a massive uphill battle to reclaim lost ground when it finally launches.