LaunchNow.co is a new startup that turns building startups into a game. (Yes, we’re there now.) The idea is that players will pit their companies against each other in order to earn badges, achievements and a “Gamerscore” which is then published to their startup’s profile page. Oh, and here’s the crazy part: LaunchNow is meant to be used with real-life startups, not fake ones.

To get started, players enter in some basic information about the startup they’re working on and are then given a set of goals they have to complete in order to enhance their company and earn badges. These achievements include things like product milestones (alpha, beta, etc.), investments, turning a profit, adding new hires and press mentions. (Score one for LaunchNow, I guess).

At its core, LaunchNow isn’t all that different from Klout, which measures an individual’s influence on social networks by doling out points. It’s just that on LaunchNow, startups are given points for other, arguably more important types of achievements than being a prolific twitterer or an early adopter of Google+.

LaunchNow’s creator is Raymond Angel, the CEO of Guild Press, and the former CEO of amassed lust entertainment, MOSH mobile and the Interim CEO of Startup Weekend. Craig Crook, Co-founder of the New Media Cartel, helped create the idea for the company, which is operating now in a fully bootstrapped mode with just Angel at the helm.

But who’s going to use this thing, I wonder? After all, if you have a great idea for a new startup, you don’t want to post it online where other entrepreneurs can read all the details, right? Angel says that’s true, so LaunchNow players can choose to keep their startup listed as “private” while they play, allowing it to remain in stealth mode.

Given the explosion of new companies, the idea for a startup-ranking service isn’t an entirely bad one. But LaunchNow is no Klout. Klout’s genius is that it sucks in public data to perform the rankings automatically – you don’t even have to register for Klout to have a Klout profile. On LaunchNow, however, rankings are based on manual data entry.

Seriously, if you’re a startup creator who’s more focused on your startup’s gamerscore, instead of, oh say, writing code, it may not matter how many badges you earn – you’re probably not going to win the real game: being an awesome company.

LaunchNow is still very much a bare bones site, with tons of other features planned, including a startup feed, user profiles, forums, customizable URLs and more. Until it adds automation to that list, though, it’s hard to believe that any serious entrepreneur would stop what they’re building to play this game.

LaunchNow is very much a sign of the times, where there’s so much opportunity and so much money, that some are approaching building a startup as a casual exercise, even a game, and not the very hard work it is supposed to be. At the end of the day, it’s not necessarily a bad thing to see the barrier to entry lowered – tomorrow’s casual one-off built by a developer scratching an itch could very well be the next big thing. And gamifying the whole ecosystem isn’t as crazy as it sounds, either. But as long as LaunchNow requires entrepreneurs to stop coding to play, it’s not likely to attract the right kind of folks to try the service. But then again, in today’s ecosystem, that may not matter. If LaunchNow now was playing its own game, it just a press mention, points and a badge. So throw some money at it, right? 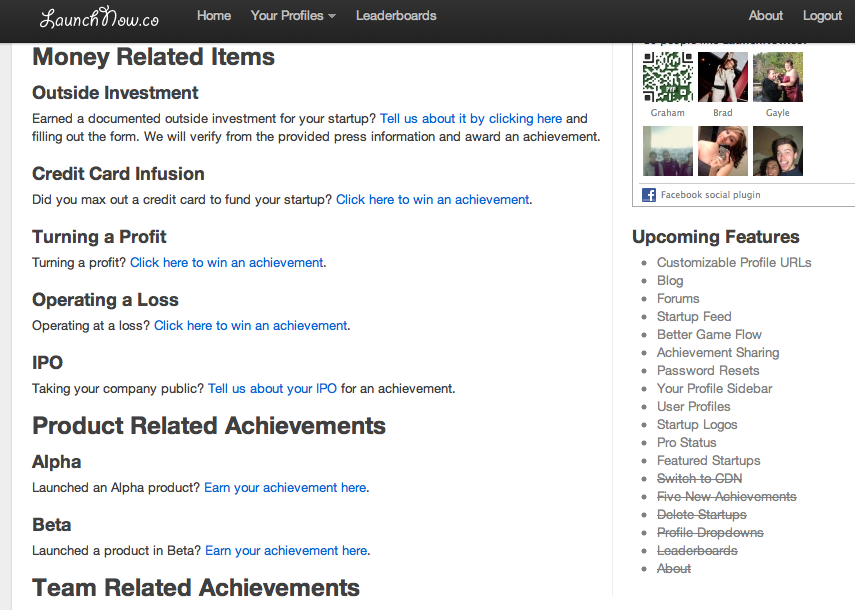