The newspaper industry is struggling to make ends meet. Mobile could be the solution, but the Apple App Store comes with a 30% tax on the subscriptions that established news outlets depend on. To buck Apple’s tax, London paper Financial Times decided to launch as a HTML5 mobile web app rather than a native app. Now it has proven the HTML5 model can work for news. Today Financial Times announced it has hit 1 million registered users who account for 20% of the outlet’s online page views, and 15% of new digital consumer subscriptions.

HTML5 works great for news publishers because they predominantly transmit text and don’t require the processing power and deep hardware integrations afforded by native mobile apps. Instead, since HTML5 is accessible across device types and it doesn’t roadblock new users with a download, it helps publishers gain readers and sell more subscriptions without paying a platform fee.

Despite grim projections about the future of paid news, FT found that users who register on mobile devices are 2.5 more likely to subscribe. Thanks to an aggressive set of in-app prompts, 45% of the 1 million registered users add the web app to their home screen, which can vastly increase return visits.

Mobile is also changing when people consume the Financial Times. While the desktop site is most popular during mid-day, the mobile site sees a huge spike between 7 and 8am, presumably from people reading when they first wake up or on their commute.

Other news outlets should see these figures and think critically about whether HTML5 might serve them better than a native app. Getting users to subscribe is tough enough without paying 30% for unnecessary functionality and a barrier to new readers. 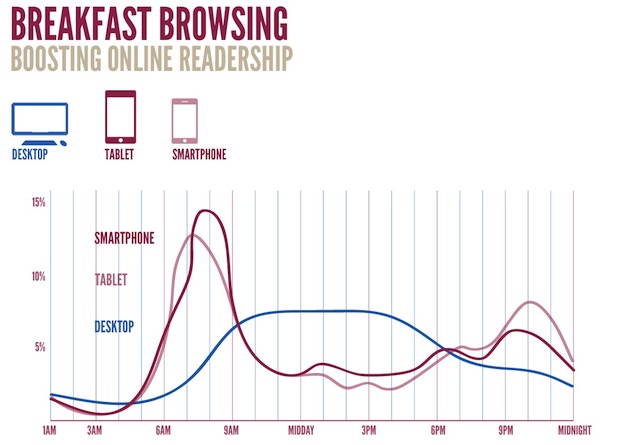