Congress is in the process of kneecapping the web as we know it with a House bill called the Stop Online Piracy Act (a similar bill, called the Protect IP Act, is in the Senate). In a misguided attempt to curb piracy on the web, the bills would introduce website blocking at the DNS level, among other things, in a way that would effectively amount to censorship. And they could have disastrous implications.

The threat is so serious that many of the web’s largest companies, including AOL, eBay, Facebook, LinkedIn, Mozilla, Twitter, Yahoo, and Zynga sent a joint letter to Congress over the issue. A congressional hearing being held today has prompted many sites to add a ‘Stop Censorship’ banner on top of their logos (you can get one here). And now some other services are taking even more drastic measures.

Head to Tumblr right now and log into your Dashboard. You’ll find that your stream of content has been replaced with censorship blocks — with a link at the top of the page prompting users to Stop The Law That Will Censor The Internet. Click the link, and you’ll be prompted to enter your phone number and street address. Tumblr will then call you to run through some talking points and tell you how to call your House Representative.

Millions upon millions of users will doubtless run into these blocks of censored text without any idea as to what is going on. They’ll be angry and frustrated . And many of them will channel that anger (hopefully in moderation and with plenty of “with all due respect”‘s) toward their representatives. It’s a bold move, and it’s one that could have a major impact — Tumblr just tweeted that users are averaging 3.6 calls per second.

You can watch this morning’s congressional hearing, which is heavily stacked in favor of SOPA proponents,  right here.

Oh, and if you really want to see your Tumblr Dashboard, try clicking ‘Next Page’ — that seems to make the censor blocks go away. 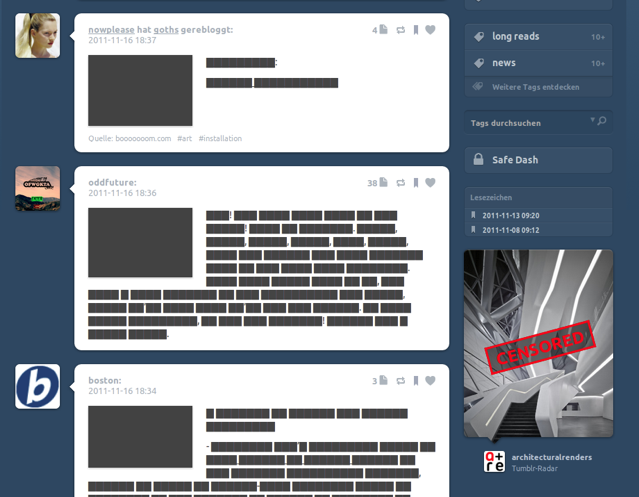