The New Luddites are back, and they’re packing heat. The mighty Economist writes of “the disturbing thought” that “America’s current employment woes stem from a precipitous and permanent change caused by not too little technological progress, but too much … A tipping point seems to have been reached, at which AI-based automation threatens to supplant the brain-power of large swathes of middle-income employees.” The New York Times chimes in: “technology is quickly taking over service jobs, following the waves of automation of farm and factory work.”

At which those of us lucky enough to be software engineers burst into derisive laughter, of course. We’ve heard all this before, more than a decade ago, when ‘outsourcing to India’ rather than ‘automation’ was the threat that would destroy our jobs. Obviously this is more of the same kind of nonsense. Right?

…Although, now that you mention it, there is something odd going on. America, Europe, and Japan all seem to be lurching from crisis to crisis without respite; most of the developed world is struggling with debilitating levels of unemployment; but at the same time, the tech world is booming like it’s 1999. Doesn’t that seem kind of weird?

Maybe I should respond: a recent Hacker News thread analyzes, and ultimately (mostly) validates, a claim that a good 30-year-old Google software engineer now takes home close to $250,000/year in total compensation. Another reports that newly minted Stanford CS/EE graduates are offered an average of $88,000 for their first post-university jobs. Well, hey, let the good times roll! Luddites of all stripes are morons! We just happen to be in the midst of a thrilling boom/bubble while the entire rest of the rich world happens to be in a crippling recession/stagnation. Pure coincidence. Right?

Unless Martin Ford and/or Arnold Kling are right. Ford essentially argues that we have hit an inflection point at which technology destroys jobs faster than it creates them. Kling writes (at length, but it’s worth reading): “The new jobs that emerge may not produce a middle class … gains in well-being that come from productivity improvements [may] accrue to an economic elite … we could be headed into an era of highly unequal economic classes. People at the bottom will have access to food, healthcare, and electronic entertainment, but the rich will live in an exclusive world of exotic homes and extravagant personal services.”

Which sounds eerily like what we would get if we extrapolated from today, no? While millions of long-term unemployed fight desperately to tread water, technology’s handmaidens — software engineers — are minting money like bailed-out bankers. That Stanford survey mentioned above seems to undercut Peter Thiel’s take that “We’re in a bubble and it’s not the Internet. It’s higher education” — but guess again: 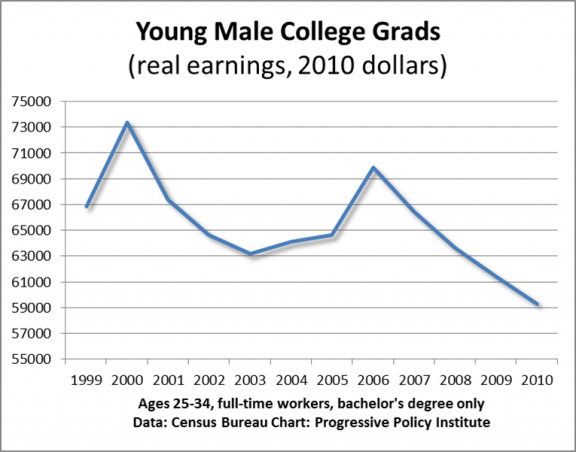 It’s beginning to look like we might have entered a two-track economy, in which a small minority reaps most of the benefits of technology that destroys more jobs than it creates. As my friend Simon Law says, “First we automated menial jobs, now we’re automating middle-class jobs. Unfortunately, we still demand that people have a job soon after becoming adults. This trend is going to be a big problem…”

It’s even been suggested that inequality may cause unrest and violence in the Western world. Don’t bet on it. True, inequality has provoked the Occupy movement, and to a lesser extent the Tea Party; but I’ve been around the block a few times, and take it from me, the world is full of nations with a tiny minority of the very rich, a slightly larger well-off elite, a small middle class, and a great majority who are various degrees of poor and struggling. Brazil, China, India and Russia, for instance, to name a famous foursome. There’s nothing unusual or inherently unstable about that kind of inequality. In fact, in most of the world, it’s the norm.

I still believe technology will be the great equalizer that brings comparable economic opportunities to all regions of the world. But I’m beginning to wonder if that same technology will also ultimately make the rich world as fragmented and unequal as the poor, and turn the majority middle class into a thing of the past.