The Kogeto Dot isn’t necessarily new. We spotted it back at TechCrunch Disrupt New York and found it to be quite the fun little iPhone accessory, but back then it was merely a prototype. Today, we’ve gotten our hands on the real deal and I have to say, I’ve had a pretty good time playing around with this little guy.

Along with the accessory itself, you’ll also need the Looker iPhone app to shoot, de-warp and upload your videos. You see, since Dot shoots in panoramic mode, the video looks kind of like a swirling black hole until you de-warp it. Processing the video into something watchable only takes a couple minutes tops.

Let me start out by saying that I’m usually not a huge fan of phone accessories. Past a case (which is necessary), I’ve always felt that the cost and trouble of hooking up an accessory outweighs the final product. Dot proved me wrong. Snapping Dot in place couldn’t have been easier, and getting started shooting video took literally less than a minute. That included downloading the Looker app, which uploads to Facebook, Twitter, and Kogeto.com.

As you can see from the pictures, Dot is not to be used as an iPhone case. Anyone who does so will sorely regret it. That said, it fits snugly and securely without being a B-word to pop on and off. The clips on the side snap on super easily, and removal is just as simple. But even after such a breezy setup, my skepticism wasn’t gone.

My complaining then turned to the quality of the video itself. “It can’t be that great,” I thought. “And watching the video will probably make me nauseous with all that spinning.” Wrong again. In all honesty, I actually shot way more videos than I needed to to complete testing and get you kind folks a sample video. I was having fun, and each video I shot was even more fun than the last to view later.

As I mentioned in my video, this could actually be used for more than fun. Personally, I’d have loved to use it as a way to record interviews, letting me look at myself and the interviewee while still hearing audio. The only issue is that Dot has a 3-minute maximum for videos, so it’d have to be a quickie interview to get it done.

Luckily, the Looker app is due for a pretty significant update, which will include nixing that 3-minute max. I see anyone who travels a lot falling in love with this product, as you really won’t miss a thing shooting with Dot. In fact, anyone who enjoys mobile video or has an ounce of creativity can probably get a lot out of Dot, and it’s one phone accessory I’d actually recommend. 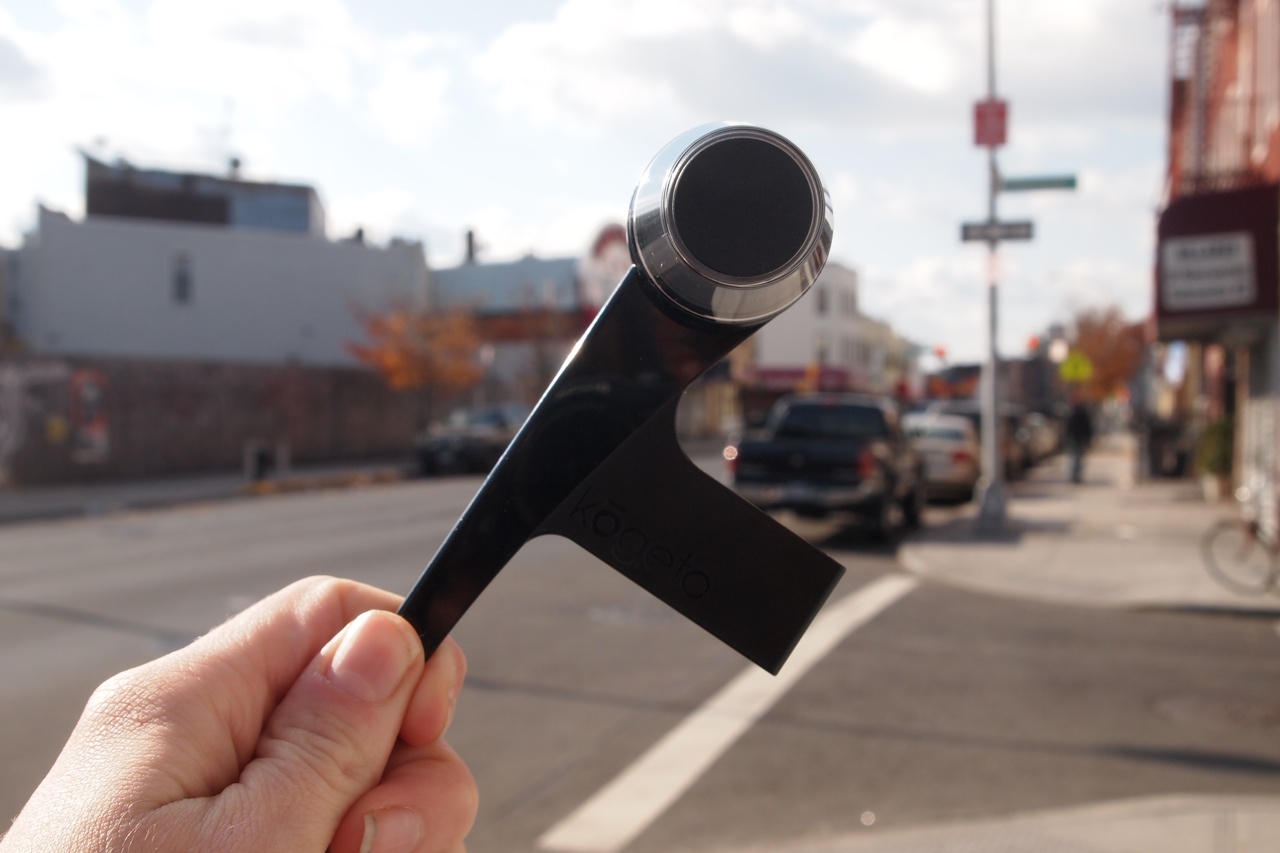 There are a few drawbacks to Kogeto’s Dot, though many should be squashed with the forthcoming update (which I’ll go into more detail on later). For one, it’s a bit awkward to hold while shooting. Since Dot shoots in 360 degrees, you have to hold the phone face down to record. You also have to remove your case to snap on Dot, meaning your holding your phone uncomfortably, away from your body, unprotected. To me, that’s a recipe for disaster so no drunk videos with Dot, OK?

Past that, you need to make sure your hand is flat while shooting, rather than curving your fingers up over the sides of the phone. Again, this leaves your phone even more unprotected, but the trade-off is keeping your fingertips out of the video. As you can see in my sample, I didn’t follow my own rules.

As far as video quality is concerned, I was pleasantly surprised. Obviously, DotSpots (videos shot with Dot) won’t be as high quality as the 1080p video your 4S shoots on its own. There’s a slab of plastic in the way for goodness sakes. But, all in all it’s just fine. Audio, however, is kind of a mess. In every video I shot there was a pretty serious audio lag, which is just annoying.

If you’re doing something more serious with Dot, rather than just shooting a fun little video to share with friends, the Looker app offers different video quality settings, including a smoother and fps settings. Video may take longer to process and upload with better settings, but you win some and you lose some. 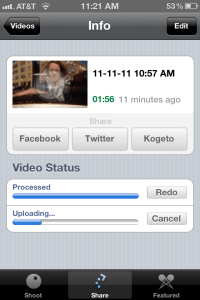 When all’s said and done, yes, the Kogeto Dot has been found wanting in a couple areas. But I got the chance to speak with Kogeto CEO Jeff Glasse who told me that the upcoming update will help fill in those missing pieces. Depending on how quickly Apple approves the update, this is what you’ll be seeing in the next couple weeks: real-time de-warping of video, location services integration, trimming controls, no more 3-minute limit, and possibly the ability to use the volume buttons as stop/start record buttons.

I say possibly because Apple is throwing a bit of a fit over that last one. Apparently, Apple’s developer terms state that only iOS’s official camera control can employ the volume buttons, but Dot uses its own custom control. The argument is that if game developers start implementing that functionality, it will confuse users who want to simply turn up the volume. It seems a bit unfair, to be honest, especially since Looker is a camera app and not a game. Perhaps there should be an amendment to that particular clause allowing camera-based applications to join in on the volume button fun, whether they use iOS 5’s camera control or not.

My favorite thing about the Kogeto Dot is that it changed my mind about phone accessories. I see this actually being something people use regularly, rather than a fun-for-a-few-minutes type of deal. It’s lightweight, portable, and adds a whole new layer of creativity to what once was a basic camera on your phone.

The Kogeto Dot retails for $79.99 and is available on November 15 at select Apple stores, Apple.com, or at Kogeto.com. The Looker app is free to download from the Apple App Store.