Instead of actually doing something productive this weekend (like getting a long overdue haircut), I may just lay around playing Atari’s new iOS-friendly take on the Asteroids franchise. It’s not easy to take a beloved classic and update it for modern audiences, but Atari managed to take Asteroids’ retro DNA and make it shine on the small screen with Asteroids Gunner. 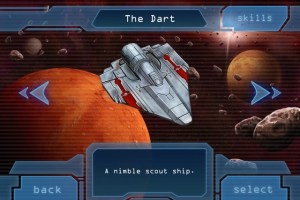 The main game is divided into 50 levels (or “waves,” as they’re referred to), with each becoming more frenetic and difficult than the last. There are two additional campaigns consisting of 50 levels each, and two extra ships to fly, but those require you to purchase some aptly-named “Space Bucks.” I’m personally not a fan of having to buy content that’s already in the game, but thankfully the basic Dart ship works just fine.

Even with the most basic ship, the game manages to strike a fine balance between “challenging” and “madness-inducing,” thanks in large part to the simple controls. Asteroids has always been one of those games that plays better with a joystick (or even a keyboard), so the transition onto a touchscreen was a little jarring at first. Thankfully, Gunner uses the same simple dual-stick layout as seen in games like Geometry Wars — one thumb controls your ship’s movement, while the other controls where your ship fires.

One big change comes to mind immediately, and it’s one that Asteroids purists may not take kindly to: the absence of inertia. Once your navigation finger leaves the screen, your movement stops completely. It makes the game easier to play, sure, but it feels sort of unnatural considering it’s a pretty major tweak to a decades-old formula.

Gunner introduces some new tweaks to the Asteroids formula, like the ability to upgrade your ship. Blowing up certain asteroids reveal crystals that allow you to upgrade your weapons and armor, which is downright required for some of the later waves. In-game achievements also make an appearance, with over 200 waiting to be unlocked by unflinching perfectionists.

All things considered, Atari did a commendable job with Asteroids Gunner. It’s a far cry from the Atari classic of yore, but the mix of old and new is balanced enough to make it a terribly efficient timewaster. Asteroids Gunner is available for free in the iOS App Store now.