Eric Alterman is a quintessential serial tech entrepreneur. He’s founded a fairly diverse set of software, telecom, and semiconductor companies that include Kickapps, which was acquired by Kit digital in 2010, MeshNetworks, which was acquired by Motorola in 2005, Triton Network Systems (which IPO-ed in 2000), TeraNex, SkyCross, and more. In 1997, he co-founded an accelerator that funded and grew companies based on tech licensed from military contractors, like Lockheed, ITT and Raytheon.

In 2004, Alterman founded a video sharing platform that he says was essentially YouTube before YouTube. Though the startup didn’t quite have the legs to achieve scale, the entrepreneur said that the company’s “failure” (coupled with YouTube’s emergence) gave him a valuable insight into how (and how not) to build a SaaS platform that can serve thousands of customers, scale, and become a turnkey solution for an entire space.

With big data all the rage these days, last year, he turned his sights to the next big thing: App data and data interoperability, with the goal of allowing developers to share and exchange the massive amounts of data created daily by the world’s growing collection of web and mobile apps.

Today, Alterman and co-founder Tom Luczak are announcing officially announcing their new venture, Flow Corporation, and the beta release of its eponymous Flow platform — a realtime data platform-as-a-service (PaaS) and content curation platform. The technology is, on the one hand, a data exchange for app developers, and on the other hand, an off-the-shelf dashboard for consumers and enterprises that allows them to create and curate information streams on any subject — like a suped-up RSS reader.

In other words, the Flow platform enables developers to take advantage of a ready-to-use backend for app data (including stream processing and aggregation) in the hopes of increasing efficiency and lowering the cost of implementing realtime data systems for their apps. Using the Flow platform, developers can connect and share data from web, mobile, and enterprise apps with other developers on a permissioned, realtime basis.

For example: A restaurant-focused mobile app may show people looking for good places to eat the best options nearby, but with Flow, the developers of that restaurant would be able to draw from (and present) complementary data from other apps on nearby stores, coupon deals, or local events. By building infrastructure that allows apps to intercommunicate and serve users with a host of contextual information, Alterman is hoping that Flow can begin to break up walled data silos and change the way developers make use of and serve realtime data. 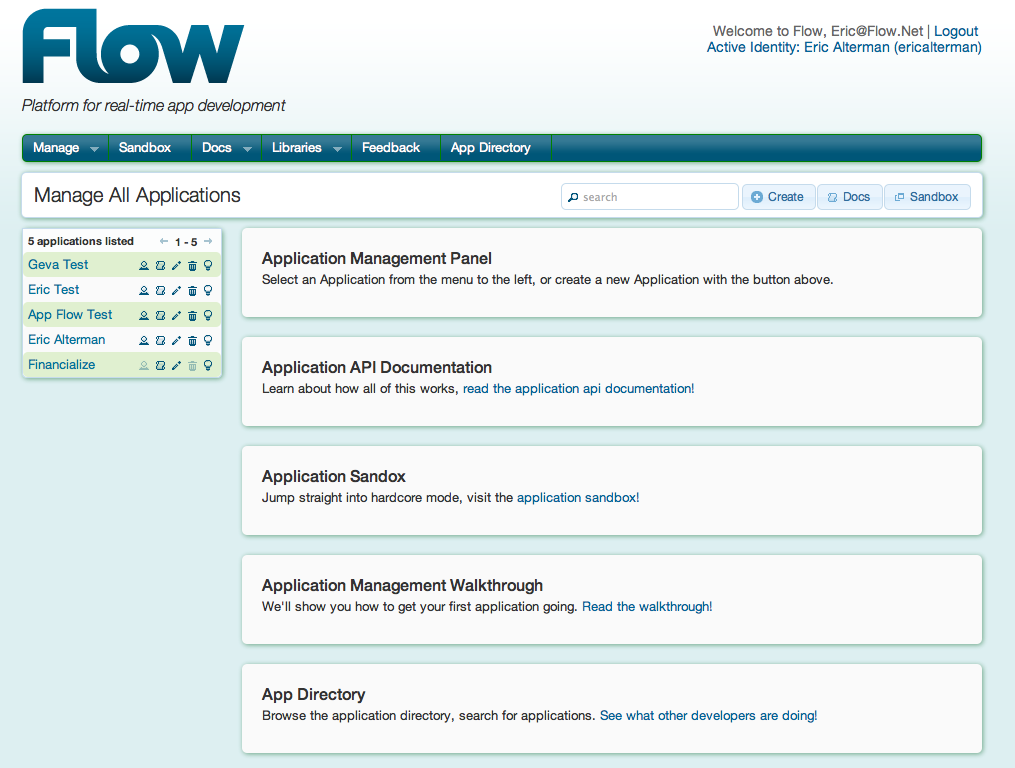 Connecting apps through social functionality was a significant first step for the future of data, the founder says, but connecting apps on a more fundamental and robust level is the next step.

On the flip side, for consumers and enterprise customers, iFlow.com is the other piece of the puzzle, offering everyday web users the ability to discover, create, curate, and share realtime information on any subject — in a filtered and contextual way. Like next-gen RSS. (Example image of iFlow’s consumer UI below.)

iFlow allows users to follow ideas instead of individuals, in contrast to Twitter and Facebook, for example, taking the next step beyond the kind of realtime info streams we see on social networks, to apply that to rich data from any and all sources.

The consumer platform is built using Flow’s APIs and really functions as an example of the kind of realtime stream processing functionality developers can take advantage of when building their web and mobile apps.

As to what’s next, Alterman says that he wants to offer developers (and consumers) the opportunity to buy and sell subscriptions for realtime data through a flow marketplace, which would give content owners the ability to control business rules and monetize data streams — from product reviews to proprietary research.

The startup has also recently closed a two-part $3 million round of seed funding from Cloud Capital Partners, BH Ventures, Blantyre Partners, Kappa East, Redstonne LLC, and Venetia Kontogouris of Trident Capital, which the startup will use to continue rolling out new features and developing its data marketplace.

For TechCrunch readers interested in getting an early look at the data platform in action, Flow is offering invites to its beta to the first 50 readers that send an email to “EarlyAccess@flow.net” with “TechCrunch invite” in the subject line.