NYC-based startup Dispatch, which just graduated from the latest batch of TechStars NYC, has raised a $965,000 seed funding round.

Also notable: Dispatch got its start at the TechCrunch Disrupt NYC hackathon earlier this year where it was the runner-up for best hack (you’ll find a backstage interview with them here). They’re in good company — GroupMe, whose founders are participating in the funding round, got its start at a Disrupt hackathon a year earlier and was recently acquired by Skype.

Dispatch is setting out to become a sort of Finder (or Windows Explorer) for the cloud. You enter your credentials for the various services you use online — Dropbox, Facebook, Gmail, Google Docs and so on — and it lets you browse through the files stored on each service from a single dashboard. You can view these files in a preview window, download them, or move them around between services by dragging and dropping files from one service’s folder into another.

Dispatch won’t be available until next month and the company isn’t keen on doing a full public walkthrough just yet, but they say we’ll be seeing more from them soon. From what has been released so far, though, it looks solid — they’re clearly paying a lot of attention to making sure the UI looks polished.

In the longer term, I’d like to see Dispatch abstract the cloud file system enough that you don’t have to remember whether you’re dealing with Dropbox or Gmail or Facebook — you should be able to just have your ‘stuff’. Dragging and dropping between each of these will certainly be handy, but I think the mass appeal will lie in making the cloud generally easier to use. 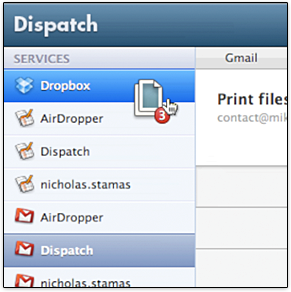